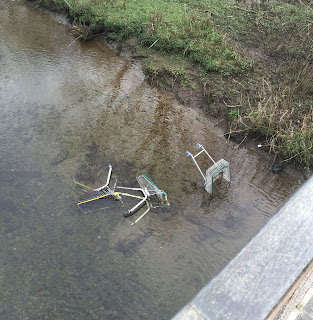 We've been forwarded details of another example of environmental ineptitude (or neglect) from Ceredigion County Council and the Welsh Government. We've been given permission to reproduce the details here. It's certainly a typical case.

A number of people had reported shopping trolleys dumped in the river at Aberystwyth. Ceredigion County Council are responsible for dealing with flytipping and litter in Ceredigion (a job they fail at miserably). The trolleys were in shallow water by the edge - a Council worker could have safely waded in and removed them easily at that point.

A number of reports of shopping trolleys in the river
at Aberystwyth - why wasn't the Council doing anything?
From FixMyStreet.

When the trolleys were found to be still in the water it was followed up with Ceredigion County Council, who responded by saying they weren't responsible for it, and to try contacting Natural Resources Wales. They didn't even forward the details on, just washed their hands of the issue.

Natural Resources Wales are part of the Welsh Government. When they were contacted they responded by saying it was nothing to do with them ... end of story, from their point of view.

And while all this responsibility-denying was going back and forth some of the trolleys have washed into the sea, adding to marine pollution. This is ridiculous. Can you imagine if all public services took this approach?


Phone answered. "Hi, this is the police, what can we do?"
"Someone's being threatened in the shopping centre."
"Mmm. Not really our jurisdiction. See the site security."
Person finds site security. Situation explained to them.
"Sorry. We don't deal with that, it's a police matter."
Rings the police again, complains. Police and site security both say "We take your complaints seriously and will get back to you within 14 working days with a response."
Silence follows.
The threat escalates into a mugging.

At that point the person didn't give up, and instead wrote a letter to both bodies, which we think is a really good example, and includes some stuff about law we didn't know (and will no doubt use ourselves in future). We'll paste the whole thing in.

I am copying this to both of you because it is a formal complaint to both bodies about the unhelpfulness of your replies. Trolleys and other items dumped into rivers are an environmental problem, a wildlife issue, a litter problem, and a possible safety issue (kayakers, swimmers, paddlers). As such their removal should be covered by one or both of your organisations. Instead, as the email chain below shows, Ceredigion County Council denied that it is anything to do with them, and said to go elsewhere (not even having the courtesy to forward an email on to the body that is supposedly responsible); then Natural Resources Wales replied and said it is not their problem either. Something is very wrong here. It is obviously someone’s responsibility; yet both likely bodies are refusing to take any responsibility. Beyond the general poor service this displays, I believe both bodies are thereby in breach of the Well-being of Future Generations Act (WBFG Act).

I think it would be beneficial to reflect on the situation of multiple metal trolleys in rivers. It may seem like a trivial matter, one that can be passed from organisation to organisation, but, ultimately, people are compromising the future well-being of the planet for future generations, through an inability, or unwillingness to work together or to fix things that improve the environment.

The Well-being of Future Generations Act (WBFG Act) places a statutory duty on specific public bodies (including Ceredigion County Council and Natural Resources Wales) to think more about the long term, to work better with people and communities and each other, and to look to prevent problems and take a more joined-up approach. These are covered by the five ways of working, particularly prevention and collaboration.

I think every one of these has been highlighted as not working in this case of the trolleys in the river.

•    CCC and NRW are not thinking about the long term – if you do not remove the trolleys and other litter they will either be washed down into the sea and then washed up on the beach, or they will get lodged on the riverbank and rust and pollute the land and river/marine environment. Either way, they will remain an unnatural part of the environment for decades.
•    CCC and NRW are not working well with people and each other. Looking at Fix My Street shows that other people reported this and many issues like it – presumably they were met with the same brush-off. But local people actually care about their local environment and communities, and you are not working well with them.
•    CCC and NRW are not working well to prevent problems. If the trolleys were removed now, they would not create future pollution and environmental problems.
•    CCC and NRW have not provided a joined up approach. CCC’s reply could have been forwarded to NRW, rather than expecting the member of public to complete another piece of correspondence.

In addition, there are two of the seven key goals of the WBFG Act that are relevant. These are:

•    “A resilient Wales - A nation which maintains and enhances a biodiverse natural environment with healthy functioning ecosystems that support social, economic and ecological resilience and the capacity to adapt to change (for example climate change).”
•    “A globally responsible Wales - A nation which, when doing anything to improve the economic, social, environmental and cultural well-being of Wales, takes account of whether doing such a thing may make a positive contribution to global well-being.”

I therefore suggest that you reflect on your statutory duty of the WBFG Act, that you work together to remove litter from rivers when it is reported to you, and that you work towards improving the environment for everyone. It should be made clear to the public that this is a responsibility you share under the act.

There is a certain irony too that Ceredigion County Council go to any lengths – including using public money to evict a pensioner from her home http://money.aol.co.uk/2015/02/12/grandmother-loses-fight-to-save-her-house-from-tesco-development/ - in order to encourage yet more supermarkets to Aberystwyth. Then the Council refuses to deal with the inevitable problems such as supermarket trolleys being dumped in waterways.

Please inform me when the trolleys have been removed – ideally before they wash away. I shall be following this up. I shall also send this correspondence to the WBFG Commissioner and to the Welsh Government.

The downside is that we checked with the letter-writer - and they still haven't had a reply other than an acknowledgement. They contacted Ceredigion County Council and Natural Resources Wales on 23rd May. It's now 8th June, 16 days later.

Of course, both bodies will say they are acting according to guideline. In their emails they said "Please be assured that your complaint is being taken seriously" and "Your comments are being considered and a detailed reply will be sent to you no later than 27 June 2016" - ah. So they will deliberate on it for over a month, while the time-related issue being reported is ignored. As we pointed out, some of the trolleys have washed down the river in the last rain, adding to marine pollution for generations to come while Ceredigion County Council and Natural Resources Wales deny responsibility and bury their heads in the sand. Totally useless. Maybe they wonder why they are so frequently despised?

Updated 14th June 2016: We've seen the replies from Ceredigion County Council and Natural Resources Wales. Both basically refused to accept responsibility for their appalling actions concerning this problem, and neither of them agreed to alter their policies or behaviour when this situation occurs again. And by then the trolleys had washed into the sea. Useless.

"Please be assured that National Resources Wales (NRW) and Ceredigion County Council (CCC), as well as other stakeholders, are in ongoing contact with regards issues in which they have a mutual interest."

No evidence of that so far - hence the complaint.

"I would like to thank you for your interest in this matter."

Shame the organisations themselves had no interest. Also, the Welsh Government didn't respond at all.