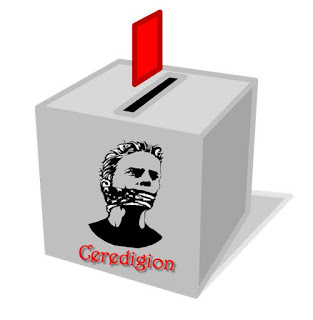 We've complained many times about Ceredigion County Council not being democratic (and ignoring any voice they don't agree with). This week they ran a ballot with local traders as to whether they wanted to take part in Aberystwyth as a Business Improvement District. It would mean extra taxes on the businesses, and vague ideas of how they might be spent.

Only 44% of the eligible voters were actually part of the ballot. Some of the voting papers were rejected by the Council. Of those remaining only just over half of those said they wanted a "Business Improvement District" (BID). So only c.23% of all eligible voters said they wanted the scheme to go ahead, yet Ceredigion County Council have counted that as sufficient and are pushing ahead with the scheme and the extra charges on local traders. Apparently they also included papers pressuring traders to vote "Yes" with the ballot paper (but no information from those opposing the scheme) in an attempt to skew the voting. Without that manipulation they probably wouldn't have even had 23% of the votes. I would hardly call that a mandate to proceed. Of course you wouldn't realise what a lack of support it had when you read the misleading statements about how "traders voted yes!" That's spin for you.

Update (24th March): "It has now been revealed that the 14 votes cast by Ceredigion Council for each of its premises in the town proved the difference between a ‘yes’ and ‘no’ vote." Source: Cambrian News.
Wow, we thought it was corrupt before, but this is shocking! They certainly tried to keep that quiet. What 14 shops does the Council run in town? The National Assembly for Wales could possibly declare the vote void because of all these shenanigans by the County Council. It needs investigating.

So, going off the figures here, only 44% of the people voted; if we remove the non-business votes of the Council we find that only c. 21% of the people in the area voted for this extra BID tax; yet it was passed, and those pushing for it claimed this result to be a show of support! We'd already mentioned the spin that Councillors and advocates for this new tax were putting forward, and the same Cambrian News gives another example:


Cllr Gareth Lloyd, Ceredigion council’s Cabinet member for economic and community development, said: “By voting in favour of the BID, Aberystwyth business owners have demonstrated their appetite to make changes locally on the issues that are of importance to them and, in so doing, to improve the town centre."

Right, so more business voted against it; an even greater number didn't think it was of enough interest even to vote; yet that "demonstrates an appetite"? A pretty small appetite. More like a minor grumble, pushed through with dodgy practices.
3 comments: