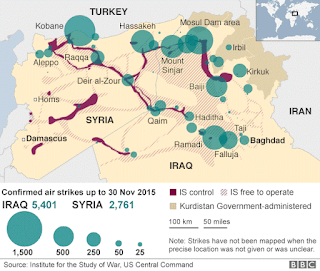 Strange. Air strikes aren't going for the areas where Daesh [IS]
is in control, they're generally targeting areas where there are
fewer Daesh members and more civilians. [Source: BBC]

Well, the vote is in, Britain once again decides it is a good idea to drop more bombs onto civilian areas because - amongst the people living there - there are "bound to be some bad 'uns". What could go wrong? How could that possibly fuel global hate and increase terrorist recruitment? Conveniently for the Government, once the UK undertakes military action the media are pushed to suppress anything critical of the country's military, and the news stories on this will hide all the other things the Government plan to do to education, pensions, the environment, privacy and so on. Poverty, unemployment, inequality, and the environment can't compete with explosives that send our limited national resources up in smoke (some missiles cost up to £1 million - that's a lot of nurses/CABs/trees planted/education funded). Ever been curious about the cost? This is one estimate.

"Each of the RAF’s Tornado GR4 jets costs £9.4million, and each flight costs around £35,000 per hour.Two Tornados are typically used for each flight, and each flight lasts anywhere between four and eight hours. Even at the lowest estimate, each flight costs £140,000.Their cargo is four Paveway bombs and two Brimstone missiles, costing £22,000 and £105,000 per unit respectively.That’s £298,000 plus the cost of the flight which is £438,000, and that’s an optimistic estimate. If the jets carry Storm Shadow missiles – which cost a cool £800,000 a pop – and conduct an eight-hour mission, the total cost is a hell of a lot higher, and none of this takes into account the cost of fuel." Metro

We're pleased that Ceredigion MP Mark Williams voted against the bombing of Syria. It's makes a point, even if the majority of MPs ended up voting for more bombings.