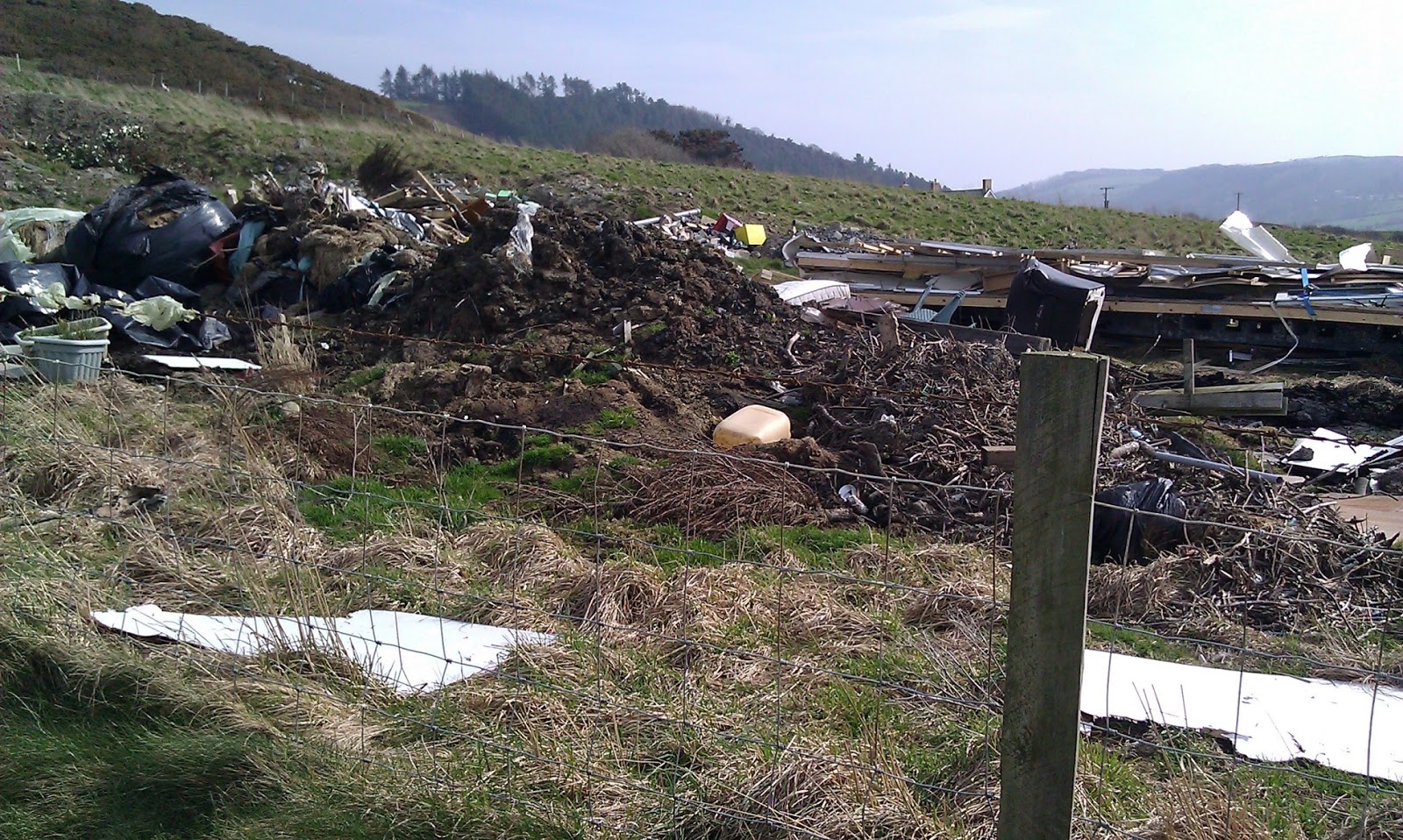 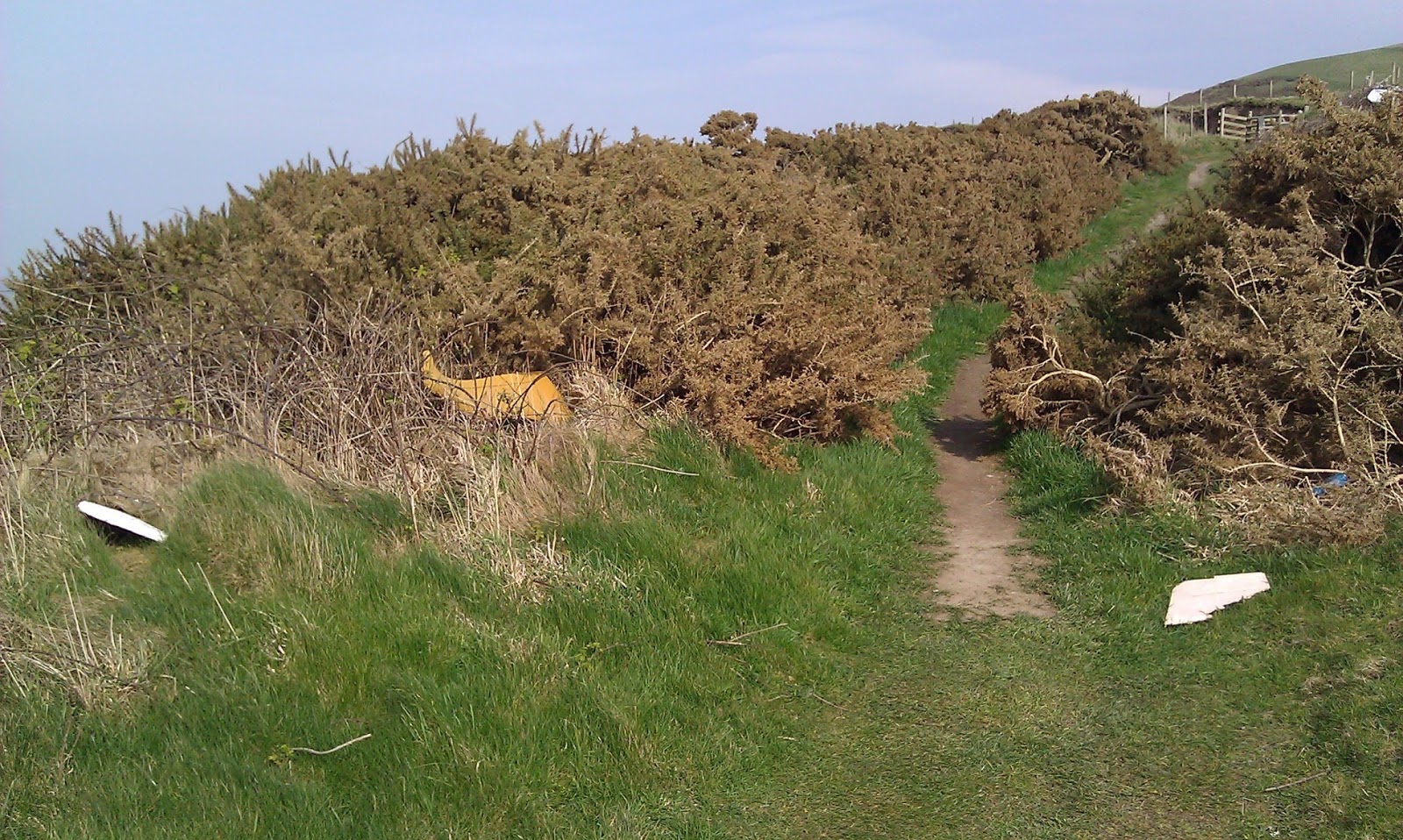 Yep, bits of polystyrene and foam blow over the low fence, across the path, then into the sea (there's an example of the impact of that kind of waste here). This amounts to littering in a sensitive area. In these cases the response should be simple and swift: the landowner should be fined, along with the cost of cleaning up their mess. We've contacted Ceredigion County Council to find out what they have done about this problem and will update the post when they respond.

If you continue along the path to Wallog you find that there is a massive amount of rubbish there, which the Council (and everyone in the area) has known about for years. 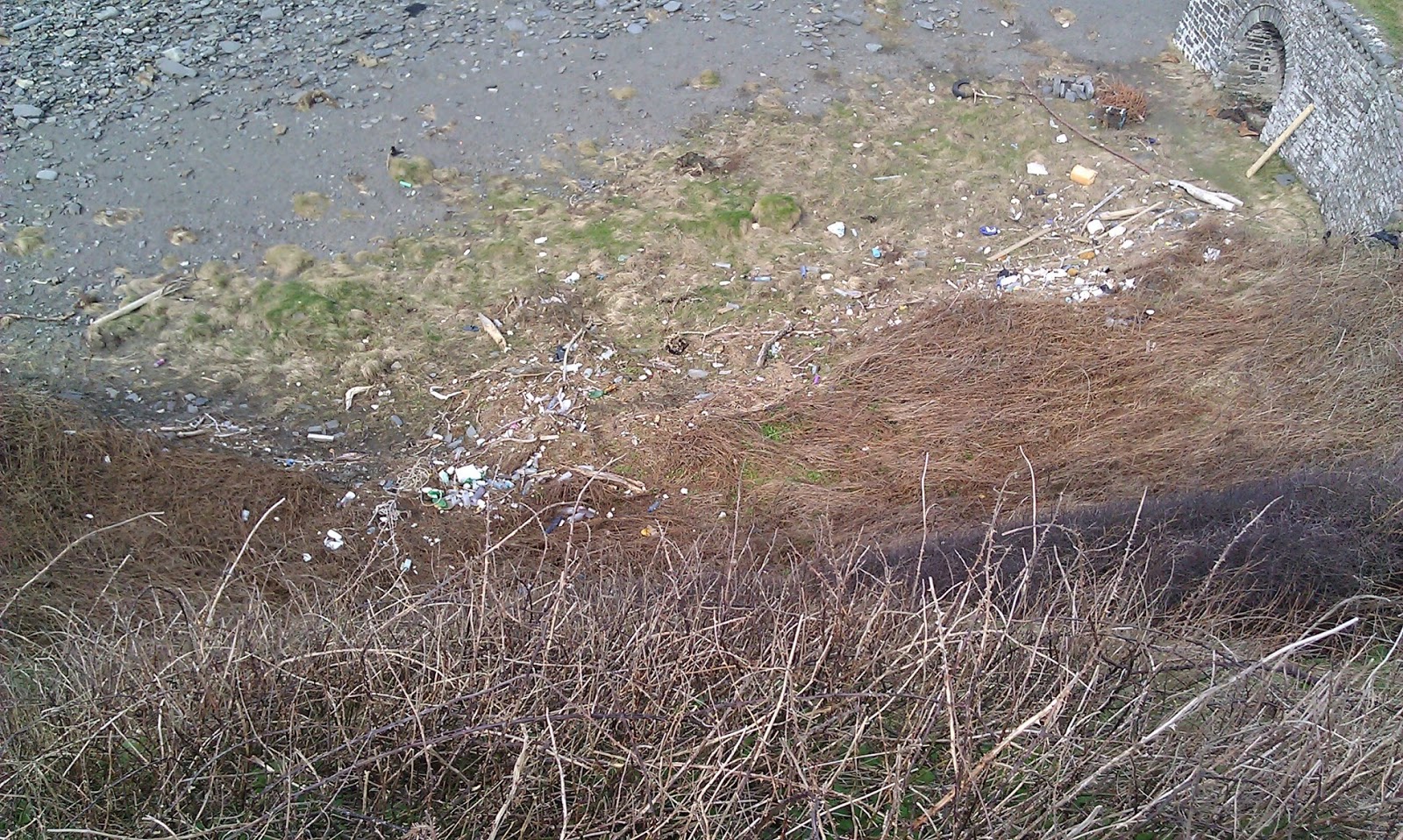 It looks small - until you get close! 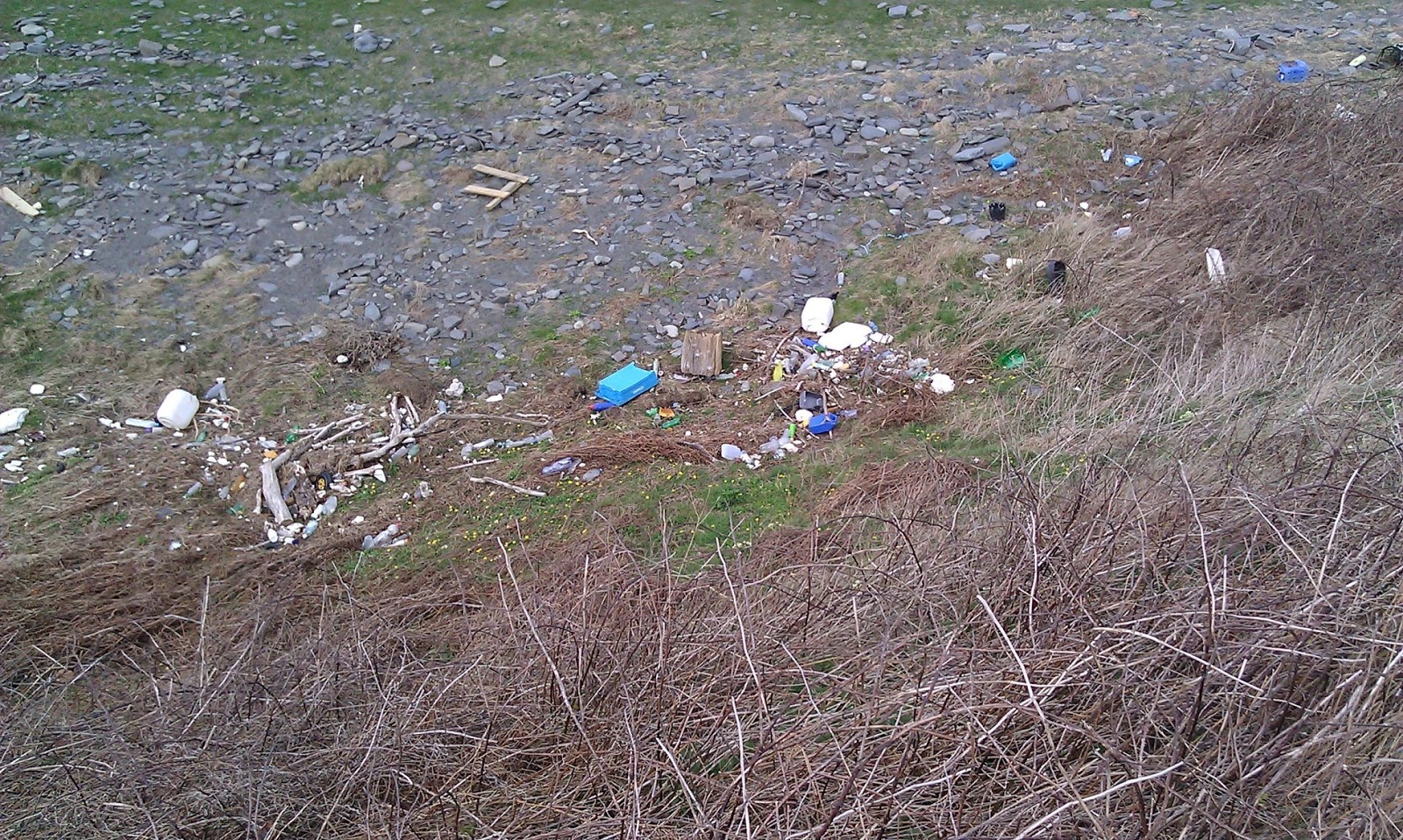 The view as you pass Wallog. 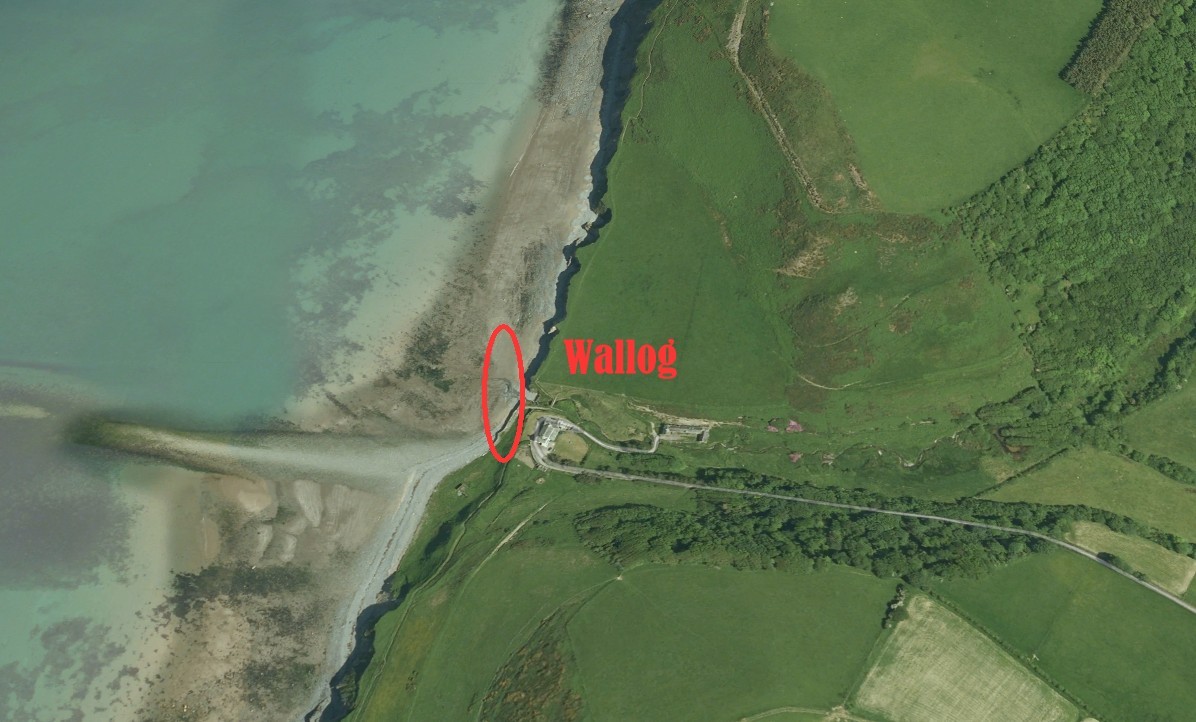 We'll ask why that has not been cleared up either. There is easy road access for Council vans.

The Council has a responsibility to keep the county clean, but they don't seem to be fulfilling that duty.

Response from CCC, 2014-04-14 (which sounds much more pro-active than we've seen in the past - hopefully a positive sign for the future):


"Thank you for your communication relating to litter and fly tipping issues in North Ceredigion.
The matters referred to are of interest to range of Services within Ceredigion County Council, as well as Natural Resources Wales, and have on this basis been shared with these. This will instigate investigations and responses as appropriate.
The various approaches adopted by the Authority in response to the issues that you refer are supported by the positive involvement of a number of external stakeholders. This includes a close working relationship with Keep Wales Tidy and a wide range of volunteers, both individuals and groups.
A litter picking event was undertaken in the immediate vicinity of Wallog over the first weekend in April 2014. On this occasion it was led by the Aberystwyth University Coast Care Group and supported by an Officer of the Authority. Ceredigion County Council collected and disposed of the materials arising.
The location, on private land, beyond Glanyrafon Industrial Estate, which has historically suffered from fly-tipping has recently been subject to cleaning works as well as infrastructure works to mitigate the matters of concern. This has included the formation of an earth bund to deter fly-tipping which will be supported with temporary signage, tree planting, grass re-seeding and the erection of a new fence along a section of the affected area. This work is being delivered by Ceredigion County Council through funding secured by a Welsh Government grant.
The Authority will shortly be launching a new initiative called ‘Caru Ceredigion’. The intention is to raise awareness and appreciation of what a fantastic place Ceredigion is and to promote positive behaviours, attitudes as well as  profile. This will extend to encouraging people to refrain from negative actions  though to positively engaging in activities that respond to these. In a climate of diminishing resources in the public sector it is deemed imperative and beneficial to consider ways of mitigating the causes rather than continually seeking to respond to the consequences.
For further details or information relating to the above, including activities you may wish to support, please contact Gerwyn Jones via 01545 572572 or email hpw@ceredigion.gov.uk
I thank you for your input into issues in which we have a mutual interest in and responding positively to."