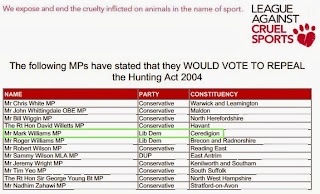 Sadly Mark Williams, MP for Ceredigion, wants to repeal the Hunting Act (which exists to protect wildlife from being killed for fun, or for barbaric traditions). His decision signals support for hunting and killing wildlife.

Hopefully his support is a waste of time since there are no plans to discuss this in Parliament, but it is still disgraceful that MPs attempt to grub votes from the more primitive members of their constituency by trying to overturn protective laws. It's not a surprise to see his name on the list with the pro-hunt Conservatives (see image). You'll find full lists of MPs and their position on the topic here.

[In the interests of balance it should be mentioned that Mark Williams is very pro-public transport, which is obviously a very good thing.]