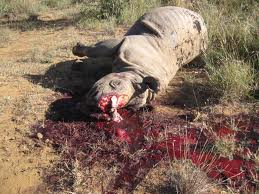 The last rhinos in Mozambique have been killed.

It is absolutely horrifying. One of thousands of species under threat from humans due to pollution or hunting. The problem is that the biggest animals which need the largest territories come into contact with humans most as we expand across the globe. And anything deemed either a pest, or of value dead (most species fall into one of those categories) comes off the worst in their contact with us. This is a process completed in the UK many years ago when the last wild bears, wolves and boars were killed by the British. Since then we have gone on to divide the land up with roads, fences and settlements. What happened to the rhinos has already been done here.