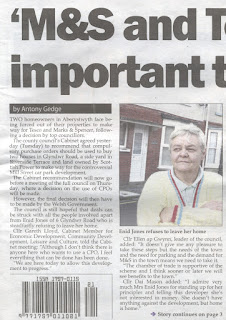 We covered the threat to homes from Ceredigion County Council last August and as far back as November 2011. The article above shows the horrible attitude of the Council and it is stunning that they are trying to force someone out of their home with a Compulsory Purchase Order, in order to build more shops. This seems to be a hypocritical case of putting the interests of big business over human rights.

If you love your home you won't want to leave it, yet the council want to imply that the fault is with a homeowner since they won't 'negotiate'. There is no 'negotiation', what the Council means is that someone refuses to give up their home due to Council bullying. And now the County Council is stepping up their bullying tactics and threatening to remove the home by legal force. Such hypocrisy. It would probably be different if it was a councillor’s home.

The Council has mis-judged the mood of the people on this. A lot of people are not against the development, but do not see the reason why a perfectly decent street of houses needs to be demolished to make way for shops. As a result there has been lots of discussion of this in Aberystwyth, and online, emails sent, letters written, supporting the homeowner and complaining about the Council's bullying and home-wrecking approach. Ellen ap Gwynn, Plaid Cymru leader of the Council, and the shop-mad Council as a whole, seem oblivious to the furore from Aberystwyth residents complaining about the proposed CPO. Thanks to everyone who has copied us in on their communications and information.

The original footprint for the development did not include Glyndwr Road and did not require demolishing homes. The development could have gone ahead without it. Only later did the developer add it to their proposal, an unnecessary addition. Predictably the Council rolled over, agreed, and we come to this talk of knocking down the houses. The Council say "there's no option" but there is another option: allow the development without the inclusion of Glyndwr Road. It would allow sufficient space for Tescos, car parks, M+S etc. Maybe even some trees and greenery eh?

Better would be to squash this proposal which many are against anyway. Why cram in more chain stores that suck money out of the county to their English head offices and draw custom from independent local businesses? Why not just encourage more local, independent shops? Make Aberystwyth different from every other cookie-cutter town rather than copying them.

The good news is that CPOs are generally for vital public services, not private retail developments and unnecessary supermarkets.

The Council has said in the past it needs more houses for the future population, so isn’t it ridiculous to knock down town houses in a perfect location? Homes are more important than extra shops for brand snobs.

The Mill Street application by Chelverton Deeley Freed for retail units for TESCO/M&S is to be heard by the Development Control Cttee of Ceredigion Council Weds 13 November 2013. Officers of CCC recommend Cllrs: to DEFER decision subject to a completion of a Section 106 legal agreement.
It seems that the Councillors are not going to have any say in the matter. They should refuse to defer but decide for themselves.