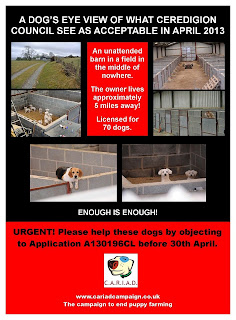 Ceredigion County Council, the authority who within the last two weeks voted 16/1 in favour of a planning application for Nant Y Castell, Pontsian - a puppy farm licensed for up to 78 breeding dogs - will shortly be considering an application from a puppy farmer who lives approximately 5 miles away from his unattended barn licensed to house 70 dogs. This puppy farmer has been licensed for a considerable amount of time without planning permission, something certain Councils in Wales deem perfectly acceptable.

https://www.ceredigion.gov.uk/index.cfm?articleid=10054
(enter Application number A130196CL in the search facility, the link to the application will appear at the bottom of the page.)

These recent photos show the face of puppy farming in our country today. Puppy farming is a U.K. wide travesty that is a blot on our landscape. C.A.R.I.A.D. and Puppy Love Campaigns have challenged Ceredigion County Council on a number of occasions about this particular establishment, below are some of their responses.

"I would confirm that the premises concerned has been inspected by an Officer of this Department who was accompanied by an authorised Veterinary Surgeon. At the time of the visit the premises was found to generally comply with Ceredigion’s licensing conditions."

"I can confirm that the date of visit was the 26th January 2012 and during the inspection the dogs did have warm, clean bed areas and gas heaters are available if needed."

"To clarify the term “generally “ it is to say that the premises is collectively and on the whole complying with Ceredigion’s Licencing Conditions. The premises is not an overflow from a Licenced Breeder. At present there is no one living on site but the dogs are visited at regular intervals in accordance with the Licencing conditions."

C.A.R.I.A.D. does not deem sawdust and planks of wood, seen in these concrete compartments, to be ‘warm, clean bed areas’. Neither do we deem it acceptable that Ceredigion County Council have licensed an unattended barn where the owners live approximately 5 miles away.

This application is for a Certificate of Lawfulness which is different to a Planning Application. If we do nothing the certificate will almost certainly be passed under delegated powers this week. Express your disgust and outright objection to this puppy farm.

We urge you to find time to make your feelings known to the powers that be. Council members are PUBLIC SERVANTS there to serve the needs of all in the community, including those who oppose puppy farming. Members of Parliament are elected by the public, for the public to represent our interests and concerns. Tell them puppy farming has no place in our country. Tell them to enforce the Animal Welfare Act. Ask them why puppy farming is still legal in the UK when if just one of the five freedoms was applied, “the freedom to exhibit normal behaviour”, puppy farming would be ILLEGAL.


Regardless of where you live, write to your MP. He or she is your voice to the Government. Explain to them about what puppy farming is and why it is ethically and morally wrong. Tell them about the exploitation. And please, tell them that breeding domestic companion animals is NOT a viable form of farming diversification and must stop. Above all, plead with them to raise this issue in parliament as a matter of urgency. If they don’t know how strongly their constituents feel, they can’t do anything about it. And please, it would help greatly if you can forward their response to you to cariadcampaign@live.co.uk so that we can follow these up with them. You could also send a copy of the letter to your MP to Lord de Mauley, Parliamentary Under Secretary at DEFRA so he too understands how important this issue is to the people of Britain. http://www.parliament.uk/biographies/lords/lord-de-mauley/2202
Laws change ONLY as a result of public pressure. In a democratic society you have the freedom to express your views to the public servants who are our politicians. Please use your democratic right to do so in writing, politely but firmly, for the sake of all the dogs in held in puppy farms in the UK now. Thank you so much.

Some of the England and Wales requirements for dog breeding licences can't be met if there is no one there for long period of times and when it snows they will not be able to get to the shed to feed and change bedding also about socialising the pups. This alone should be sufficient reason to prevent these puppy farms.

Here are some useful links:

MEMBERS OF PARLIAMENT
http://www.parliament.uk/mps-lords-and-offices/mps/
(Taken from the Parliament website – ‘The UK public elects Members of Parliament (MPs) to represent their interests and concerns in the House of Commons’.)

If you think it's acceptable for 70 breeding dogs to be housed in an unattended barn, in the middle of nowhere, then please do nothing. If however, you think this lack of humanity towards our companion animals does not belong in our country, please make your voice heard now.

You could also make your thoughts known to the Cambrian News.
http://www.cambrian-news.co.uk/contact-us/

Wales, and Ceredigion, is notorious for puppy farms. It was in a feature of 'Week in Week out' a year or so ago, and one farmer was prosecuted for his horrible abuse and neglect
http://www.ourdogs.co.uk/News/2011/Mar2011/News250311/welsh.htm

The WElsh Assembly stopped short of bringing more legislation on puppy farms though, when it had the chance in the update to the dog welfare bill - a crying shame
http://www.newswales.co.uk/index.cfm?id=22087

The RSPCA response to the Welsh Government's proposals last year is here
http://www.rspca.org.uk/getinvolved/campaigns/companion/dogownershipinwales I think the puppy farming stuff was taken out of the final bill.

Many thanks for the updates, it's a horrible situation, and we appreciate the extra links.