Missed opportunities. That could be the slogan for those in charge of planning for Aberystwyth (and Ceredigion). The Aberystwyth Gateway Transport Infrastructure project has gobbled up £2.5 million of our money. The centre of the town now has less greenery than before, and what have we gained? Slightly different pavements and moved, draughty bus shelters that are confusingly labelled with both numbers and letters. People were appalled at the work that was done (we gave a sample of some comments last February). It's no surprise when those in charge of planning refuse to demand that green spaces or trees to be incorporated into proposals. The 'infrastructure project' also failed to incorporate cycling into the changes, another missed opportunity which shows that the money wasn't really being spent on an integrated transport network. A spokesperson for the worthy Sustrans said of the Aberystwyth project:


"The simple provision of a dedicated cycle lane would have made the whole area safer for everyone. The council has neglected to include this in the redevelopment and this just illustrates their lack of vision and their total disregard for the needs of cyclists. It was a wonderful opportunity to have a safe route for cyclists incorporated into the development, but the result is that cyclists have to negotiate a busy and dangerous area. Aberystwyth’s ‘transport gateway’ has become a disincentive to people to use sustainable forms of transport." [Cambrian News]

Let's campaign to try and improve at least a few areas, since the Council can't be relied on to do that. There is a proposal to green Aberystwyth's approach road - see this mention in the GAG news page, and watch the video below.


That would be a huge improvement on the current situation!

New trees on a campus 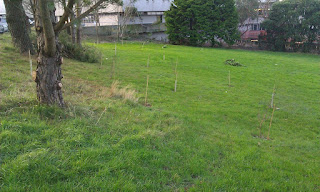 
"Managing our Penglais Campus as a nature reserve, recognising and celebrating our historic landscapes and its unique bio diversity."

As the image above shows, they have started to plant some new trees, which is a positive step. We'll monitor their developments in this area. All organisations should seek to increase their green spaces, and the County Council should build the requirement into all developments in the county.