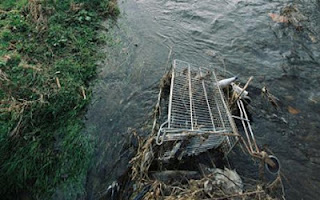 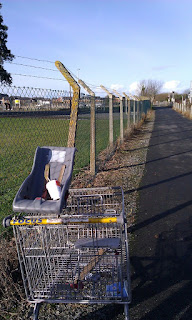 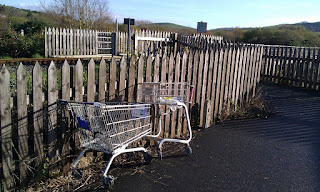 
More needs to be done. The chief executive of British Waterways (the public body which looks after 2,200 miles of the UK's canals and rivers) said:

"while some retailers had taken steps to clean up their act, [retailers close to] rivers were not doing enough to keep their trolleys out of the water. While some supermarket customers will always be intent on abandoning trolleys away from a store, there are a number of effective measures that can be better implemented that make both business as well as environmental sense."

None of the best practice is difficult. Defra provides a guidance document here, which has loads of good ideas. Some examples of things that can be done:

The retail park companies need to consider adopting better practice in the management of their trollies to stop them becoming a litter issue, and those which are lax in dealing with the issue need to step up their game.

The idiots who took the trolleys in the first place are obviously the primary people to blame, but companies can adopt better practice to make it more difficult for theft and littering to take place. 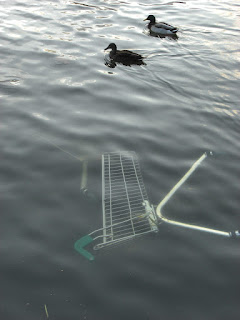 As we've said, B&Q were informed of their trollies' location on Thursday morning. Today the manager of B&Q was asked why the trollies hadn't been collected yet. No answer was given as to why B&Q hadn't done what they'd promised, but the B&Q manager said adamantly they wouldn't collect any of the Focus trollies, because they're not B&Q's responsibility. She said Ceredigion County Council had been repeatedly informed about them, and done nothing.

There may be a nit to pick here. Just to keep readers outside of Aberystwyth informed, there is no Focus store in the town any more, B&Q took over the business site. In fact, B&Qs owners Kingfisher bought many Focus stores across the UK when Focus went into liquidation, taking over many of the sites. This was the case in Aberystwyth (see this photo prior to opening, 'B&Q taking over Aberystwyth Focus premises in May 2012'). So what happened when B&Q took over the site? The Focus trollies were already there. In B&Q's press release here, they say: "After months of team bonding, store re-fitting and now daily lorry deliveries, the former Focus DIY store is preparing to open its doors as B&Q Aberystwyth on 1 June."  So in all that time, if they didn't plan on keeping the shopping trollies, why didn't they dispose of them properly? Did they just roll them to another part of the retail park and abandon them, so that they could end up being part of a litter problem elsewhere in Aberystwyth?

Another angle on the issue is that if we see litter, we're under a legal obligation to do something. People who care about their local community would probably report it to the Council. Those with even greater social conscience might pick it up - CIN has every respect for those who take part in litter picks in their local community (many CIN members have done this on their local beaches, parks and communities; even some progressive local schools do it). In a similar way, if a company send staff or a van to the location of dumped trollies, take their own and leave the others they aren't doing anything wrong (in the sense that they have no legal obligations to also move other companies' trollies). However, if they had been incredibly responsible, and community minded, and collaborative with neighbour companies, they might have taken the abandoned trollies back to the shops where they came from. (And asked the Council to collect the Focus ones, seeing as Focus no longer exists - at least they'd then be in a location where they wouldn't end up in the river as a hazard). Since most companies try and make claims about contributing to the local community I think most people would agree that in collecting others' trollies they would have been doing something good, and 'going a step beyond'; by collecting their own trollies and leaving the others they're not doing anything wrong per se, just adopting the irritating 'not my problem' approach.

We're aware that the B&Q manager apparently got over-zealous at the idea that this might be discussed online. We won't go into further details about arguments or legal threats from B&Q, though it's ironic that in B&Qs press release they say: "The team are really excited about the store opening and to meet all our new customers from the surrounding community. [...] We can't wait to open our doors and show our customers what a fantastic range we have backed up by a team of really helpful staff." In this case surely a 'thank you for letting us know about the trollies' and an apology for not collecting them when first informed would have been a better approach from B&Q. As it was, they removed the B&Q trolley an hour later - it's just a shame it took two visits to get that done.

The Focus trollies were still there though (we've reported this to the County Council).

Questions we'll be asking B&Q as a follow up: 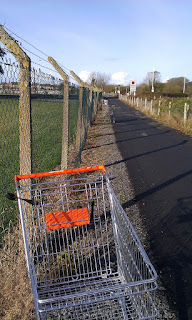 A B&Q trolley this morning. On the morning of Thursday 15th November B&Q said they'd collect them all immediately, but they didn't, and they were still there today. Leaving them in vulnerable locations is how they end up as litter elsewhere, or in the river. B&Q were told about the trollies again today around 11am, and they eventually collected this trolley. Companies have a responsibility to the local communities that sustain them, and should act accordingly.

"Why didn't B&Q dispose of the Focus trollies responsibly when they took over the site?"
B&Q's response: "When B&Q took ownership of the Focus store there were no Focus trolleys on site and so there were no trollies for us to take responsibility for."
Which is strange, since the staff spoken to at Aberystwyth's B&Q were aware of them and said that the trollies had been around for a while.

"Why didn't B&Q collect their own trollies when they were first informed? Do they not see it as an important issue?"
B&Q's response: "The Aberystwyth store team collected the trolley in the photo – which was over 1 km from the store - on the same morning that they were advised of its whereabouts."
Actually, as stated in the original post below, they had not collected the trolley three days later and had to be told again, and also told that this would be publicised before they did anything, so B&Q's statement is a lie. Some of the photos taken (not all are reproduced below) are dated Thursday when B&Q were first informed, and some on Sunday when they were told a second time, and both have the same trolley in.

"Why doesn't the company adopt good practice to prevent trollies from being taken, as discussed above [in the post]?"
B&Q's response: "B&Qs Aberystwyth customers are exceptionally responsible in their trolley use and return trollies to the trolley bays in the car park. It is very rare for customers in Aberystwyth to remove trollies from B&Qs premises."
Which ignores the question, since their trollies HAD been removed, and B&Q had not adopted the good practice as stated.

I would say the best thing to do is to report this www.fixmystreet.com

An excellent site, thanks for suggesting it!