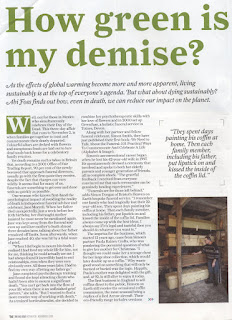 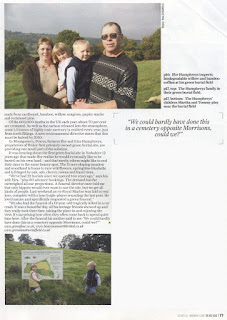 Other useful and informative links:
Coffins or shrouds can be used which are biodegradable (no plastic or metal parts). Coffins might be made from cardboard, willow, bamboo, seagrass, hyacinth or banana-leaf; with real rope handles rather than the traditional imitation-brass (actually plastic). There are some coffin examples here.

As an aside, cremation is not seen as being a green option. Cremation uses 20 litres of fuel and releases 5kg of activated carbon into the atmosphere, contributing to global warming; Britain's crematoria emit over 1.3 tonnes of highly toxic mercury every year, because of tooth fillings, and since 42% of bodies contain a metal or plastic implant of some sort, burning those adds to dioxin release too.

Options in Ceredigion
Luckily Aberystwyth has a woodland burial site near the crematorium (thanks to the resilient campaigning of an individual and the support of Aberystwyth Town Council - see article below, from the Cambrian News, 15th May 2003, p5). 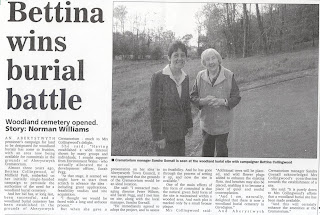 It's the only option in the whole county, for reasons we'll get on to next, but other parts of Wales (and the UK) have sites available - see this list.

On 14th August we asked the County Council about their policy:


"Choice is good when it comes to burying loved ones, and although some people choose a conventional burial with stone, or cremation, some would prefer burial with a living memorial (tree or bush).

1: Is that allowed or forbidden on burial sites in Ceredigion?

2: If you don't allow it in most burial sites in the county (which I hope isn't the case!) do you provide any natural burial sites or organise things so that some burial sites have a section set aside for this?"

Their response from the Highways, Properties and Works department a week later said:


"I regret to inform you that we do not currently permit the planting of living memorials on graves within the Authority’s Cemeteries. [...] Regrettably the Authority does not currently make any provisions for natural burials as there has not been a demand for this service in the past."

Saying that 'no-one asks' is a rather poor excuse to do nothing. If we all took that approach there’d be no progress. “No one asked for solar power, so we haven’t researched it,” said the scientists. “No one asked for recycling facilities, so we never built any.” Maybe 'no-one asks' because they assume the Council would just say no anyway, or they don’t realise it could be an option. Unless it is offered then people can't choose an option. This suggests a lack of imagination on the part of the Council. The many links from this page show that this is an important issue for many people - around 5% of burials are now 'green' and many more people want to have this as an option. The fact that the council did not point us to any of the information in this post, or even to the woodland burial site in Aberystwyth, shows why so few in this county take up the option - the Council does not apparently promote it, inform people about it, or enable it.

So Ceredigion County Council, who are supposed to serve the residents of the county, forbid the greenest burial option on sites they maintain. If you plant a tree or bush as a memorial on the grave of your loved one then the council will presumably cut it down.

The email did suggest that with special permission (apply in writing) they might allow a tree or bush to be planted somewhere on Council land as a 'memorial' "at a suitable location, that does not impede or compromise our maintenance regime" as long as you pay "any costs associated with your proposals".

In an older communication we were forwarded the council said: "Since 2006 the Authority has adopted a policy that all new burials (these are burials that are not reopening an existing grave) will be in a Lawn Section within the cemeteries. This means that the only memorial that is permitted is a headstone."

We should add that this is just the county council's policy, not law; they could adopt a greener policy if they wished.

Interesting, thought provoking, though a bit morbid I'd reckon.

Thanks for this information. It's something that I've been considering now that I'm getting on a bit. I had thought of contacting the local council but if they don't know about their own woodland site it's not much use! I'll try one of the other links first.

I've already requested this in my will - although my chosen site isn't officially sanctioned for burial purposes (yet) ...! No headstone, everyone plants trees and I've also requested a grove be planted via the Trees for Life organisation.

That sounds like a lovely approach! I'll look in to Trees for Life as well.