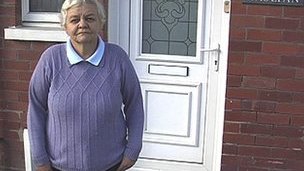 Enid Jones fears her home will be demolished

In the past we have reported on threats to homes due to Ceredigion County Council wanting to encourage yet more identikit supermarket developments in Aberystwyth. There are a large number of posts on this site about why this would be bad. Well, Ceredigion County Council apparently want to force people out of their homes so that developers and supermarkets can have an easier time turning Aberystwyth into an even more built-up area and make it even harder for independent town-centre shops to thrive.


"A council report, which went before Ceredigion's cabinet on Tuesday, said the authority had been asked by developers Chelverton Deeley Freed to use compulsory purchase powers to force the sale of the homes in Glyndwr Road. [...] Ceredigion council officers recommended compulsory purchase orders (CPO)." From the BBC.

So you might settle down in a home and think you're there for life, only to find that you'll be forced out by a Council with the powers to mess with people's lives in this way. This is sickening.

This is actually a double-post. We often get sent information or copied in to complaints related to the environment and Ceredigion. This week we were sent details of a situation where a Ceredigion resident had reported a bad case of fly tipping. They had contacted Ceredigion County Council six times without getting a proper response. In the end they had to make a formal complaint just in order to get the Council to reply to them! It is clear from the copies we were sent that the Council not only didn't bother to reply, but even after the formal complaint they never explained why they had been ignoring communications. The Council keep these complaints internally and don't inform outside bodies or the public of how many get made and what the response is, which sounds like an attempt to brush things under the carpet and hide them. As to the actual fly-tipping, the Council decided not to clear it up, claiming that it would cost around £10,000 (which is strange, because a few council workers and a van could do it in an hour).

The result of these two stories is that it looks like the Council will ignore county residents with impunity, refuse to clean up eyesores, whilst still charging full council tax; yet they are quick to act when threatening to evict people from their homes so they can make deals with developers. Something seems wrong there, somehow? CIN agrees with the person who sent in copies of the communications - anyone in the county who is let down by the Council should be entitled to a reduction in their council tax. 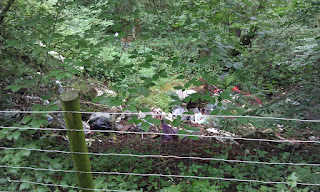 Fly tipped rubbish - don't expect
the County Council to do anything about it!

Can you say where the flytipping site is?

Classic and unbelievably disgusting behavior by the government. There is the same thing over in the States, called Eminent Domain. Basically, for a "public purpose" local governments can seize property to make way for development or the like. Needless to say, public purpose tends to be interpreted rather widely by the authorities.

Alun, as far as I can tell it is on the road that comes out of the north-east corner of Glanyrafon Industrial Estate, it kind-of follows the river and I think it is in the woods that the road passes through. I could always get back to the person and ask for more exact details if you want.

It's interesting to see that other countries can do this too, and not surprising. Still a horrible situation, that no-one's home is safe. Live in the countryside? You might find your land being taken for an airport/power station/military base etc. Live in a town and you're no safer if the Council want to encourage more national chains in. Disgraceful. There should be a right to enjoy your home without interference or fear of being forced to move elsewhere.