We've been forwarded some details of two cases that illustrate an interesting situation involving Ceredigion County Council which we'll give some space to.

In early February a county resident collected over 40 alcohol bottles, mixer bottles, cans and Morrisons carrier bags left in some nearby woods, planning to wash and recycle them. Many of the glass bottles had been smashed. However, they then found receipts in the bags for the alcohol, which had been purchased at Morrison's with a Visa debit card. They therefore got in touch with the police who said it was a fly-tipping issue and therefore Ceredigion County Council's responsibility to investigate and prosecute. The details were therefore passed on to Ceredigion County Council. The Council could work with the police: using the receipts and (if necessary for further evidence) fingerprints from the bottles it would be possible to track down the antisocial fly-tippers/public drinkers. However Ceredigion County Council did not respond, nor to any follow ups, until finally a formal complaint was made against them. At that point one of their departments (on February 24th) claimed that although the department was responsible for investigating these issues they were not going to. They did not want to work with the police to take the investigation anywhere, despite having all the evidence required to track down the fly tippers, on one of the rare occasions when there is a way of actually tracing those involved in anti-social behaviour like this (public drinking, smashing bottles and leaving it as litter). The Council also refused to collect the remaining bottles that the County resident had been unable to carry. The Council then signed the issue off at the start of April, saying that there would have been little chance of a prosecution. 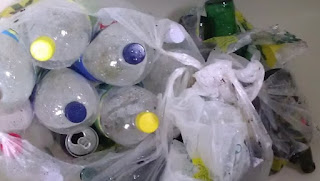 A photo we were sent of some of the bottles collected

It seems rather disappointing that the Council chose not to pursue fly-tippers in this case, but maybe they were right about the prosecution chances, so CIN normally wouldn't have covered a case like this. The twist is that around the same time people working for the Council were also accused of fly-tipping litter, and the Council is not prosecuting in that case either. The two cases are worth putting side-by-side.

At the end of February Ceredigion County Council contracted workers to resurface the public footpaths in Aberystwyth, that run from Penyfron Road up to the Aberystwyth University Sports Cage, then back down from there to the main road (Llanbadarn Road). However, when they had finished, the workers tipped leftover materials onto the land adjacent to the path, for the length of the footpaths, in some cases climbing up banks or over fences to dump it amongst the bushes. Some areas were cut back completely and unnecessarily, and are now covered in rubble and litter (wire netting, bits of pipe and so on). In one or two places the contractors cut back bushes and left the branches resting on other bits of fence, which now weighed down on the bushes there, damaging them and threatening to uproot them. One shame is that the soil and stone could actually have been used to repair some section of the bank that have collapsed, rather than just being dumped as fly-tipped waste. Ceredigion County Council were responsible for hiring the workers and supervising their work, then signing the jobs off. 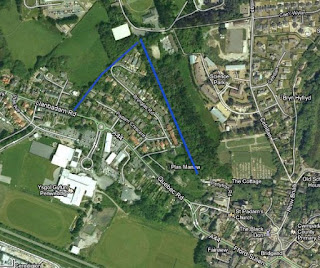 It took Ceredigion County Council over a month to investigate the complaint. They then said they would 'ask the contractor to attend a site visit at some point' to possibly tidy things up a bit more. However, they did not say that they would prosecute them for dumping wheelbarrow's worth of materials on private land, nor even that they would avoid using that contractor in the future.They also didn't name the contractor.

CIN was forwarded copies of the original letters and we're satisfied that the facts reported above are genuine. We've had a look at the sites and included some photos below, which back up the claims. Hopefully things will get tidied up, and the County Council won't allow this to happen again. 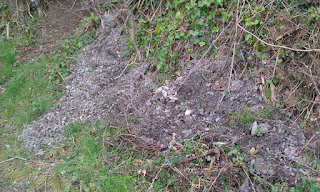 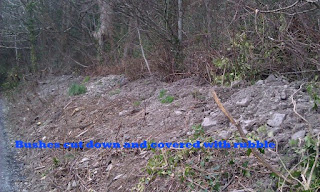 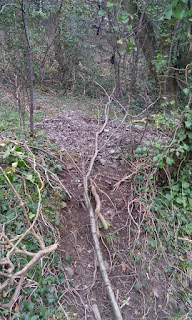 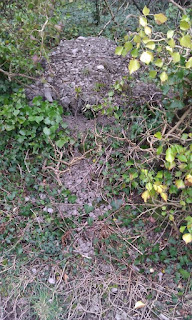 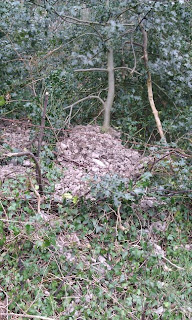 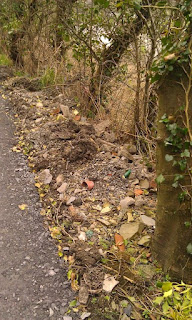 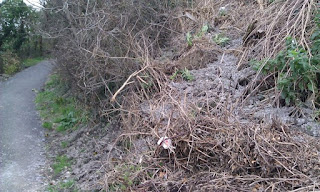 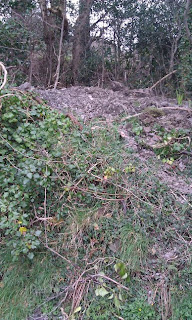 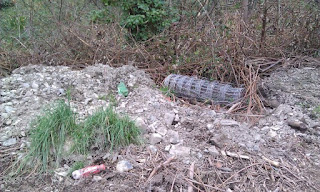 on the path issue, it's probably getting rarer to find workers who take a pride in tidying up, making the area look nice, and finishing the job off properly. far easier just to bung it all to one side. i use that path too and it looks a right mess.

Who is that stupid and callous to leave 40 bottles of anything in the woods, especially alcohol? Its just plain anti-social behavior, no other way to describe it. Too bad there the chaps weren't prosecuted.