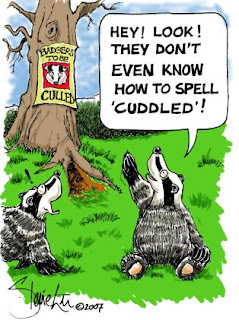 "It is high time to stop arguing about wasting time and money on trying to kill off badgers in the hope of a comparatively tiny benefit over a nine-year period," said Mr Williams. "We need universal annual testing of cattle, effective movement and registration controls and an end to farmers trying to evade them. Firm controls worked supremely well in the past, bringing the annual cattle toll to as low as 628 in 1979. The annual total remained at about 1,000 a year for 20 years - and the 11-year reactive badger culling programme during that time had no effect overall."

Sadly, Caroline Spelman, Secretary of State for the Environment, has decided to proceed with the two pilot culls 'to determine the efficacy and humaneness of the free-shooting of badgers'. Her statement was made after Prime Minister's Question Time on Wednesday 14th December 2011.