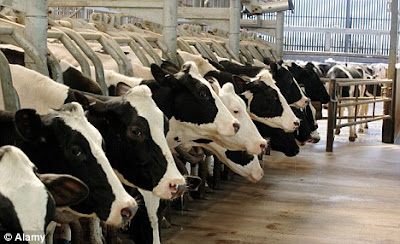 
The Welsh Assembly Government has used every dirty trick in the book it push badger killing through - ignoring science, ignoring the results of consultations, publishing false information. Read previous posts with the badgers label for details. The truth is that TB was falling due to stricter measures being imposed on farmers and transport. Guess what? Some farmers have been flouting these regulations and defrauding the public in order to increase their profits. The more this has been investigated, the more widespread the fraud has been found to have spread. The result is an increase in TB - not caused by badgers, but selfish and cruel cattle farmers. Read about it here, and keep an eye on the Badger Trust website. When politicians come to your door, make sure tell them what you think of them if they support killing badgers.

In brief: the fraud was uncovered in The Times following investigations by Trading Standards officers who found that some farmers had been keeping dairy cows that have tested positive for TB on the farm and by swapping ear tags have sent less productive cows for slaughter. This fraudulent, criminal activity means that some farmers receive full compensation, paid for by the taxpayer, for animals that are worth a lot less and furthermore are keeping diseased animals on the farm risking spreading the disease within the farm and to neighbouring farms. But this is not the only fraud that has been occurring. In February the owners of the largest dairy herd of 900 cows in the west country were heavily fined for moving cattle under TB restrictions. In the same month a farmer was also heavily fined for moving cattle in breach of TB regulations after admitting to 87 offences and he also asked for a further 102 offences to be taken into account. His son also admitted eight separate offences and asked for 29 others to be taken into consideration.