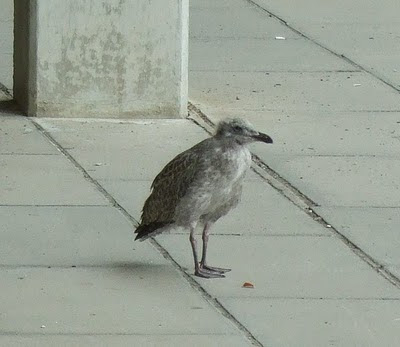 CIN has received emails about orphaned seagull chicks on Aberystwyth University's Penglais Campus outside the Arts Centre this week. On further investigation in nearby buildings we were informed that Aberystwyth University had installed acoustic bird scarers at Penglais campus. We investigated yesterday and did find seagull chicks wandering around in obvious distress while adult seagulls seemed unable or unwilling to land near them to help. One person told us that Pestokill (a company that profits from exterminating animals) were being used by the university to do this.

If all this is true it means that although the university has chosen a non-lethal way of scaring birds from their nests they have cruelly chosen to do so at a time of year when the chicks are unable to fend for themselves. Cue the distressed and hungry chicks abandoned to starve while the adult seagulls are unable to do anything.

We have been in touch with the university to check the facts, and also with PICAS and the RSPB to ask about the legality of moving adult birds away at times of year when they have chicks which will be left to starve - at the very least it seems to be a form of cruelty.

Update: PICAS have a lot of useful information. E.g. on this page it points out that the seagull is a protected species, and "these [acoustic] systems ... cannot be used within the breeding period. In most cases so-called problem birds such as gulls cause the most significant problems during the breeding period and therefore a system of this nature would be worthless." So it currently appears as if the university is sneakily breaking the law by using the systems at this time, as well as wasting public money in doing so. No wonder they have been keeping this quiet from the public. The pages also point out that: "in order to control gulls effectively an understanding of the species is vitally important and therefore advice must always be sought from a bird control expert rather than a pest control company. Pest control contractors know little or nothing about the habits of gulls and how the species will react and respond to the controls provided. This, combined with the fact that contractors have a vested interest in selling products and installation services, renders any advice provided by a pest control contractor extremely questionable at best." Yet if the university are using Pestokill then they have obviously gone against this advice and wasted their money.


Seagulls at Aberystwyth University from Caredig I Natur on Vimeo. 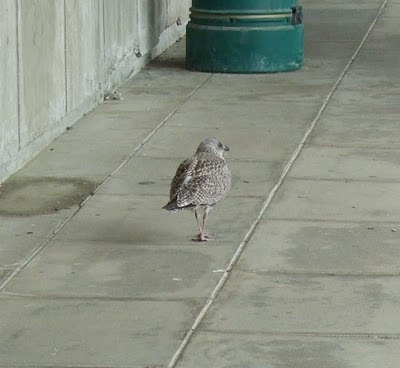 
Update 11 July 2010: Aberystwyth University's Estates Department did not bother to reply. This confirms that everything we wrote above is true (as well as giving them a chance to respond we had specifically stated that if they did not reply then we would take it as a confirmation that the facts were all correct).

On 8th July a Wildlife Advisor at RSPB UK said that "Gulls are legally protected"and without a General Licence harming them would be illegal. Does the university have a licence? Even if they do (and there is no evidence that they have one) the RSPB added that "However, the method they are using could be illegal under cruelty laws. Preventing the adults returning so the chicks starve seems unnecessarily cruel."

On the 9th July we had a further information from PICAS UK's expert technical consultants. They said that "The photographs provided show juvenile gulls, Herring Gulls [...] What we would suggest as a matter of urgency is that somebody grabs the youngsters and puts them back onto a flat roof, as close to where they are now as possible. [...] Additionally, we would recommend that someone keep a very close watch over the birds to find out exactly what the current situation is. It could be that as a pest control company is involved, that they have harmed or killed the adult birds illegally - we feel it would be unlikely particularly when Herring Gulls are now so much more protected than most other gull species, but it is possible so you need to spend some time observing."

So is Aberystwyth University breaking the law, or wasting money, or just cruel? Or a combination of these?

Yes it is EXTREMELY CRUEL to do so to the chicks at this time of the year , these chicks have nobody to defend them except some nice people like CIN. SHAME on Aberystwyth University and those who make such decisions on poor animals who are abused and left to cruelty,, Sad story!!

What is the situation regarding feeding flocks of seagulls in seaside areas? Is bread an ideal food or is it actually harmful to them as say feeding chocolate to a dog?