Aberystwyth University has brought in the diggers again, as the University's apparent plans to replace green areas with buildings and concrete continue apace. This time it is the Sports Science Department, which is being extended onto the green space nearby. We suppose that isn't too unexpected, since the University cut down part of a wood to build the department in the first place. 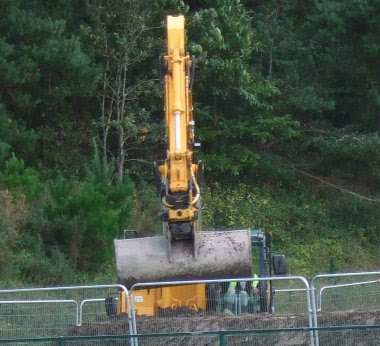 As part of the work the University's running track will be out of action for over 6 months, when it will be reopened by extending it onto yet another green space. When CIN rang the Sports Centre staff to ask about this, we were told that the running track was the only free fitness activity the University provides. 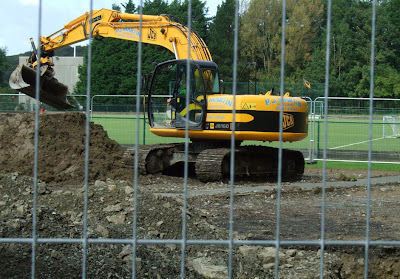 A member of the Sports Centre staff added that, as usual, there was no consultation with stakeholders, and no advance notice. The University has ignored complaints about lack of consultation in the past, and obviously continues on this course. In fact, it is going to get much worse as the University tries to cram three campuses onto one.

As ever, with Aberystwyth University the first thing you know is when the diggers move in.

In an amazing example of spin, the Sports Centre called this loss of the running track 'Fantastic News' - though of course, since anyone wanting exercise will now have to pay them for it, it probably is fantastic news for them. They went on to say that:


"The Sports Centre is delighted to announce that as part of the Sport & Exercise Science Extension Project, a 400m two-lane 'trim track' will be situated around the existing AU Campus all-weather pitch. This will provide recreational and competitive runners with a much-needed high-performance, measured training facility. The works will be undertaken in two phases.
Phase 1: SES Carwyn James Extension starts 7th September 2009 and will necessitate the current track being out of action from August 2009.
Phase 2: The Track works start 15th March 2010 - with both phases scheduled for completion by 23rd April 2010.
Thus, it is anticipated that the all-weather pitch will be out of action from 15.03.10 to 23.04.10 (6 weeks - 2 of which are over Easter). We apologise for any inconvenience this may cause but are confident our customers will be rewarded with a wonderful new facility."

Why is it spin? How about the fact that there was already a 400m measured two-lane track for recreational and competitive runners - so there is no 'wonderful new facility', just the loss of an existing facility for a huge period of time.

Of course, the work was due to start on 7th September, but started a week early - one CIN member was told by a member of the Sports Centre staff that it is typical of the University's Estates department to give out false information (when they give out any at all).

This example was a typical one where there was no consultation with stakeholders. The chair of CIN had tried to start a dialogue with Aberystwyth University about this back in January 2009. We asked Dr John Harries, the University's Pro Vice-Chancellor, a number of questions (which were CC'd to the Director of Estates, John Williams):
None of these questions were answered in any way.

Since then some of the buildings such as the Arts Centre extension have already gone ahead. Student Services, the Student Fees Office and the Cash Office, International Recruitment and Collaboration, and the University Printing Services have all already moved from the town to Penglais Campus.

As to the future, there will be more of this. The University's Estates Strategy was approved by Council in December 2008 (it has been worked on since 2006). The gist of it is that the University aim to move eveything to Penglais Campus (from town and from Llanbadarn Campus and what used to be IGER).

The University is apparently anti-consultation. Even though it has been planning these things for years, and already got developers and planners involved, it did not consult with its stakeholders: the University's staff, students and local community, all of whom use the campuses. The University could have saved money by consulting them, not paying huge sums to external consultants who don't know the area and the history, and don't have to live with the mess they make.

Just some of the moves still to come, gleaned from public announcements and communications with concerned parties:
Where will it all fit? It won't. If they do move all of that to Penglais then most open green spaces will be built on, despite all the areas they have built on in the past - there is no other way of housing all those departments and offices. It seems to be a crazy decision to try to centralise the University, rather than being better incorporated into local community as it is now. The University currently has buildings in all those places, but would apparently prefer to close them and build new ones - do they have some surplus of cash that they need to spend? Otherwise such wanton changes with their inevitable loss of green space just cannot be understood.

The University's Estates Strategy is obviously an old-fashioned document agreed by a load of backwards-thinkers who can't think of anything original.

Greener options would be:
What is needed is:
If there was that level of openness and clarity in decision-making concerning building, then it would counteract the long-standing reputation the University has for not caring about opinions and for being secretive. Currently there are no consultations, as if those who make decisions have disdain for the opinions of everyone else. But that is counterproductive. When people have less stake in an institution it affects their loyalty; they may be more likely to leave to go elsewhere; they feel ignored and disenfranchised; and are not likely to enhance the University's reputation or aid recruitment to it, since they lack faith in the institution. Aberystwyth University has a chance to change its old-fashioned closed-doors reputation for a modern, open and inclusive method that stands a better chance of preserving the natural environment.