GAG, the Grwp Aberystwyth Gwyrddach / Greener Aberystwyth Group, are a group which aims to promote the conservation and management of accessible green spaces and street trees in and around Aberystwyth as valued amenities for the community.

You may have seen their new leaflet lying around - it shows some of the local green spaces we should visit, enjoy and protect.

Their website is under construction, and does not yet include their new leaflet. Hopefully the site will develop over time, so give this worthy group your support!
No comments:

The Story of Stuff

Don't forget to monitor our Delicious account, new links are added all the time (and you can see a summary on the right of this blog).

Our latest addition is 'The Story of Stuff' - an informative 20 minute video showing the chain of processes involved in manufacturing the goods that fuel a consumer society - and the alternatives we could adopt to selfish consumption.
No comments:

(For all posts relating to Aberystwyth University, click here)

Aberystwyth Arts Centre has been featured here before, due to the fact that it keeps destroying green spaces for buildings, and does not consult with stakeholders (staff, students, visitors) about any of its plans. 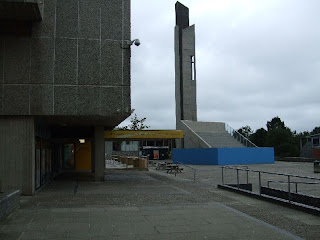 The plaza in front of the Arts Centre - there is a subtle concrete theme here. Note the fenced-off 'La Scala' steps. The concrete eyesore that is 'La Scala' took five years to plan and construct 'one of the largest public arts commissioned in Wales' and it was finished in 2003. The steps have been closed off as derelict and unsafe for a significant time now. A waste of public money on an ugly, badly planned and shoddily-built project? Another example of the mess the Arts Centre's projects make?
In a special post, CIN focuses on just two of the projects that earned it this reputation.

Forthcoming Film - The End Of The Line

The Fish Film Company have their cinematic release of The End of The Line on June 8th , the first major feature documentary film revealing the impact of overfishing on our oceans. Filmed
over two years, it shows the effects of our global love affair with fish as food. The film examines the imminent extinction of bluefin tuna, brought on by increasing western demand for sushi; the impact on marine life resulting in huge overpopulation of jellyfish; and the profound implications of a future world with no fish that would bring certain mass starvation.

Tickets for preview screenings at cinemas on World Oceans Day, Monday 8 June, are now available from their site. Aberystwyth Arts Centre cinema will be showing the film.