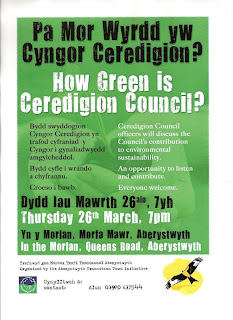 Three council officers (Huw Williams, Bob Jacques and Garfield Williams) will give a presentation, followed by questions and discussion. Click image above for more details.

Update 29 March 2009
The event was good, but unfortunately Ceredigion County Council's attitude wasn't. Whenever they were asked questions or suggestions were made they resorted to the same typical bureaucrat's defences, i.e.
They appeared to want congratulations for the paltry things they do, and were dismissive of suggestions that would take things further. They also stated at one point that they would not consider one suggestion made unless it was made 'officially' by a group such as Transition Towns - since when was it okay for councils to ignore suggestions by individuals?

So the answer to 'How Green is Ceredigion County Council?' is 'not at all green' because they do not have a green mindset. They give planning permission to build on greenfield sites; allow ribboning of development; allow developers to build on floodplains and recreational ground; allow huge building monstrosities such as their new skyline-dominating building in Aberystwyth; they allow luxury housing developments where a house costs £300K+; they support the ridiculous idea of demolishing some of the Aberystwyth town centre for a chainstore to move in; they campaign for a destructive and short-sighted Llanbadarn bypass, thereby sending out a message of support for car-use and pollution, and a message that says SSSI's are not important; they don't prioritise green issues; in recent road developments they had a perfect opportunity to incorporate a cycle lane but chose not to do so... We could go on but Sundays should be for relaxing, not ranting! So please have a great Sunday, and many thanks for being a CIN supporter!
:-)

I agree. I say that they can not possibly be seen as green at all.

We need some Green councillors to steer it in a better direction. However, this is difficult when about 3/4s of the Councillors represent farmers in rural areas. Greens only live in a few parts of the county and Plaid always toe the line for the farmers.

In theory only one Green County councillor could have a large effect. As it is we have one Green in the form of Alun Williams (he was a member of Green Party before he joined Plaid).

In Aber town we only have Chris Simpson who seems more interested in keeping his seat on the town council than promoting the Green's agenda. He is also a keen advocate of twinning with towns in Germany and Brittany, likes his sholidays does Chris.

Thanks for the comments Sylvester, I agree with what you say. I remember a green independent standing for Community Council twice - each time she was doing well until Plaid started collecting people and driving them to the polling station. There was no way to compete with that kind of organisation. It's a shame, in our society there are many people who don't feel that any of the main parties represent their interests, but it is almost impossible for people outside those parties - i.e. without resources and backup - to get elected.