(For the full picture on this topic, click here to see all posts)
Below is the coverage from the Cambrian News, 23rd October 2008, page 11 (click to enlarge - this applies to all images on this page). 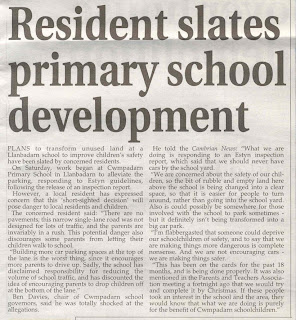 In that article the school Governor, Ben Davies, makes a number of misleading comments in an attempt to deny the ineptitude of the school administration in reducing school traffic on an unsuitable road.

Local residents have also passed on a response from the Ceredigion County Council Department of Education and Community Services. Unfortunately it mostly consisted of repetition of statements already made by the school, rather than acknowledging the problem. However two of the statements made by the Department require further comment.

1 - Is someone lying? Or just confused?

The Department of Education and Community Services states quite clearly that the new parking area is NOT for parents (see below). 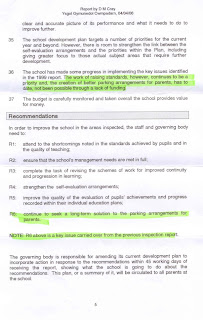 Therefore either:
Either way the whole thing is suspicious, and gives the impression that there is some misunderstanding and confusion between the school (represented by Ben Davies above) and the Department of Education and Community Services.

The Department of Education and Community Services states in the extract below that the school has made EVERY EFFORT to tackle traffic. 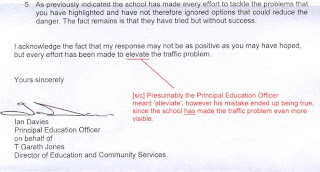 That is untrue. Has the school:
The school has not done all these things. Therefore it is a lie to say that they have made 'every effort'. The truth is that they made a bit of an effort; then gave up after their half-hearted and unsuccessful attempts. Let us hope that the children at the school do not adopt that attitude.