The BBC has reported on the pressure being put on Wales not to go ahead with the cruel and invalid cull of badgers - a cull based on prejudice rather than science. Read the full article here. This is good news - the more bad publicity there is for the Assembly's ridiculous decision, the more chance there is of getting them to revoke it.

"The government has decided against a cull of badgers in England to control TB in cattle, the BBC understands."
From the BBC Website.

We have covered the subject of badger culls a number of times (see the topic listing on the right). Currently Wales is going ahead with a mass cull; whereas according to the news item above, England will not be doing so, which is excellent news.

Any sane person would be extremely unhappy with the decision by the Welsh Assembly Government to kill badgers, despite all the scientific evidence to the contrary. Obviously some people here make decisions based on politics and votes, not good science (Elin Jones, Minister for Rural Affairs, and supporter of badger-killing, can be emailed here). 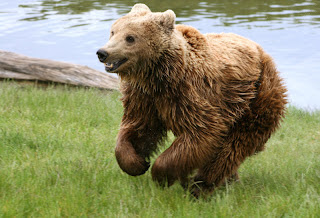 Brown bear - persecuted then made extinct in the UK by humans
Read more »
No comments: