Kill all the wildlife!*

Mankind in general has always had an appetite for killing. In terms of wildlife we continually see calls to kill this, or 'cull' that species - badgers, squirrels, ruddy ducks, deer, foxes, seals... The reasons given are usually laughable considering the fact that humans have overpopulated the majority of the world, and pushed other species to the point of extinction in doing so.

Below is an article on this subject - from Animal Aid's 'Outrage' magazine, issue 148 Autumn 2007, p7. Click on the images to read it. It primarily focusses on hedgehogs, boar, and grey squirrels. 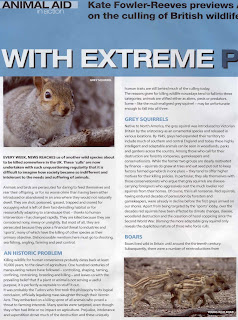 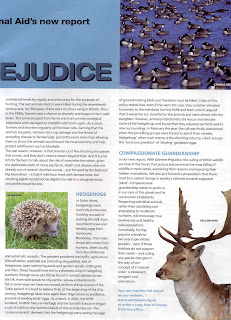 Badger culls have been discussed in other posts.

Another shameful cull is the RSPB-supported cull of all the Ruddy Ducks in the UK - yes, they want to kill every one! In this case the ducks' crime is breeding with a duck that looks different, which upsets the RSPB's ideas of racial purity. The hybrid ducks are fully fertile and breed with more white-headeds. If the ruddy duck is slowly replacing the white-headed duck then so be it. It doesn't cause any suffering to individual ducks.