In defence of cycling

In a piece in the local newspaper a councillor, Paul James, claimed that 'Inconsiderate cyclists [are] putting lives in danger' (Cambrian News, 20 Dec, p4). The basis for the article was the claim that cyclists are zooming along one particular pavement which has railings on one side and houses on the other, and pedestrians coming out of their houses are in danger. Whilst we don't support cyclists zooming along pavements and failing to pay due care and attention to other people around, the other side needs stating.

Statistics show that it is motorised vehicles that are the real danger to pedestrians, and to cyclists. In Wales, there were 1,324 pedestrian casualties in 2006 (p185, Road Casualties:Wales 2006) and 496 cyclist casualties in 2006 (p3, Road Casualties: Wales 2006 - Report available on Welsh Assembly Government website). Many drivers drive too close to cyclists, they also speed past them, or they simply fail to see them at junctions or roundabouts because they don't bother looking.

The reason why some cyclists, particularly young children, may ride on the pavement is possibly because there is no safe alternative cycle lane to enable someone living in Llanbadarn village centre to get to Aberystwyth town centre. It was a missed opportunity when the two new roundabouts were made in Llanbadarn Fawr that cycle lanes were not included. Furthermore, even when there are designated cycle lanes with clear white markings, pedestrians persist in using these cycle lanes to walk on even when there are pavements less two metres away. The reference here is to the designated cycle lane from Plascrug Leisure Centre and past the two schools to Plascrug Avenue. On nearly every single occasion that one rides on the cycle lane one has to move out of the way of pedestrians walking in the (marked) cycle lane. Even worse, during the school run times, cars park all along this cycle lane completely blocking it.

Roads and pavements will be safer for everyone when the Council create cycle lanes and paths that help commuters and shoppers; when the Council invest properly in public transport; and when vehicle drivers start not only driving with more care and attention to other road users, but also start walking, cycling (both healthy alternatives) and using public transport more.

Of course, the biggest danger of all isn't directly wheel-related. According to the Welsh Health Survey 2005/06, p3:

If you think about it, this statistic is shocking - 1 in 5 Welsh adults are clinically obese. This leads to ill health, premature death, and a drain on NHS resources. Bearing this in mind the best solution isn't to whinge at cyclists - but to get on your bike, and leave the car at home!

In Aberystwyth you can join in with Critical Mass and get support from fellow cyclists. 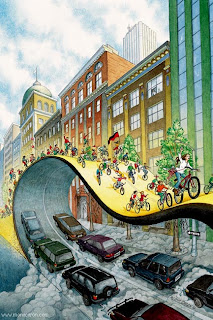