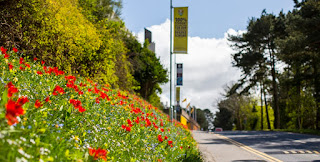 It's nice to point out positive things when they occur. One of the main reasons most developments are worse than they should be (housing estates and so on) is because they don't incorporate enough wildlife-supporting environment. If a house was built on a bare green field, then an orchard was added, and flower banks, and bushes and other trees, it would be a net gain. Councils and the government let us down by not enforcing that. Instead they cram houses on, with no wildlife corridors, just predominantly roads, paths, foundations, fences (instead of hedges), small patches of manicured lawn rather than bushes and flowers. Councils and the government extend the ruin over our countryside.

Anyway, as an example of ways that can mitigate change, Aberystwyth University recently cut back some bushes - but instead of leaving the earth bare, they planted wildflowers. You can read more about it here. Councils should adopt this strategy (and other green ideas) whenever there are new developments.