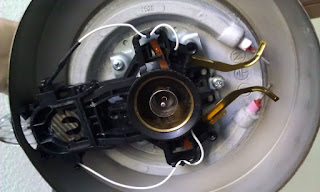 The interior of a kettle. Fragile connections, parts near heat,
lots of plastic moving parts. What could go wrong?

Planned obsolescence is horrible. We mentioned it here and here. Ah, kettles.

I would rather have a no-frills kettle that is reliable. No water-level window (they're a point of failure and leaking), no fancy bases, no filters, no internal lights. Just a kettle with minimal parts, high-quality, with fewer things that can break. Although the Morphy Richards kettle looked nice I was immediately concerned by the on/off switch (that lights up) - it is the most handled component in the kettle and seems to be intentionally of the flimsiest design. It didn't feel sturdy, and I suspected it would be an inbuilt failure point. I was almost right.

It stopped working recently, for no apparent reason. Power was getting to the kettle - when the kettle was on the stand and the switch depressed, it lit up blue as it should (which shows the kettle was getting power through the stand). But it wasn't boiling water or doing anything. Minutes later and the kettle was still cold. That suggested either the heating element had failed, or the connection from the switch to the heating element. A good quality one should last 10 years. But many companies use cheap elements, which break from thermal shock in short order. It's strange that it worked fine for the morning cuppa, then the next time it was used in the afternoon it was just dead like that. The kettle is just on our kitchen side. No kids, no workmen, no power cuts, nothing out of the ordinary.

After a day of testing I opened the bottom of the kettle (three screws) in case it was just a loose connection, but it all seems fine. The on/off switch seems flimsier than ever when viewed this way, and I'd have no faith in it lasting, but in this case it wasn't the failure.

I checked the receipt, and yes - the warranty ran out three days before the kettle broke. I'm really starting to believe in inbuilt obsolescence. Every kettle I buy seems to spontaneously die a few days after the manufacturer's warranty runs out. It can't be chance, it happens too often.

It's not that companies don't make stuff to last any more - it seems to be that things are made to last only as long as the warranty. Then they break, and are designed not to be easily repairable (sealed units, no replacement parts, gaps and leaks between the different materials such as the water level display, non-standard fittings, weak elements like the switch). That's crap for the customer, and even more crap for the environment.

I wish there was a kettle with good-quality, built to last, and guaranteed for ten years. I wouldn't mind if it was more expensive. I'd buy it just to save this hassle, and the impact on the environment of mountains of wasted electronic goods.

By the way, this isn't just aimed at Morphy Richards - it applies to almost all electric kettles sold in the UK, whatever the manufacturer. The last one was by Russell Hobbs and also lasted only a year. They're designed to be thrown away rather than repaired. What a waste.

Update: I just want to add that Morphy Richards Customer Services were helpful and replaced the broken kettle without a quibble in the end. My concerns about the design and longevity of many of these white goods (regardless of the company making them - it is not just Morphy Richards), and the environmental impact of replace-rather-than-repair (in our culture as a whole - applies equally to phones, TVs etc), still stands.

I sometimes got through two electric kettles in a year. I totally agree, so badly-made and wasteful. In the end I got an old-fashioned kettle with no electronics, that I heat up over a gas ring. Some of those have a 10-year guarantee.