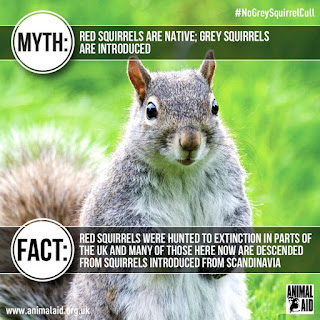 We recently discovered that the Wildlife Trusts support killing grey squirrels, and have withdrawn our support from them (and I've removed them from my will, to be replaced with a more compassionate organisation!). The Wildlife Trust are part of Red Squirrels United, who will be "training" volunteers to cull greys, probably with clubs. Sounds lovely, doesn't it. There's a petition here, and more information here.

The Wildlife Trust had a page about squirrels, and did their best to hide their plans. Amongst a whole page of text was one innocuous line with a vague mention of controlling grey squirrels. It would make you think they were planning something harmless, like setting up squirrel traffic lights. No. When they say "control of grey squirrels" it is a euphemism for killing them. Rather dishonest to try and hide their intentions in that way. It reminds me of the RSPB supporting killing certain birds (but doing their best to keep it quiet, especially from bird lovers, in case people got offended at their hypocrisy and stopped giving them money). Oh, and the Wildlife Trusts then deleted all their tweets and replies on the topic, presumably to try and bury the discussion and hide it from anyone searching for information.

The research is clear when it comes to culling - it does not help to boost red squirrel numbers. DNA profiling of red squirrels found that the vast majority living in the UK are descendants of imported reds, rather than native British reds. There is a wealth of evidence which also shows that red squirrel decline is mostly due to human activity, namely deforestation, and previous persecution. There are a bunch of studies here. In summary, there is no evidence to show that culling is an effective means of conserving red squirrels. 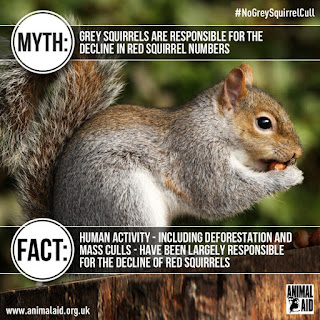 Yes, the real problem is not the colour of a squirrel, but human impact. Wildlife Trusts and organisations like that don't want to point the finger at the real cause though, in case it affects their donations. So they create scapegoats instead.

The image above is a good example. And we saw more evidence of that this week. Red squirrel forest habitats must be protected. Yet the Scottish Forestry Commission have brought forward their plans for more clearfelling. In just one small area of Scotland they have already felled three large areas around a village and have not replanted any trees. They propose to continue the clear felling which will leave the populations of red squirrels and pine martins no suitable habitat here. There's a petition about the Scottish Forestry Commission plans.

Forestry Commission Scotland (or any of the Forestry Commissions or equivalents, such as Natural Resources Wales) shouldn't clearfell ANY area. Sensitive taking of a limited percentage of the trees (up to 20%, spread throughout a wood rather than all in one place) is possible, since the wildlife and wood can recover. They could give it a few years before returning to that wood. Until the FC and NRW learn to coppice sensitively, we'll be left with hillsides looking like bombsites after the forestry commissions have been in there and stripped them bare, leading to loss of habitat for wildlife, loss of topsoil, erosion, ugly landscapes, disruption to wildlife, all just to maximise profit.

Wildlife needs the trees to survive. Clearfelling should be a crime. It is the ultimate act of vandalism. 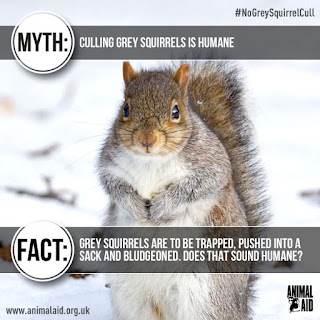 1. No species should be killed or suffer because it loses a popularity/cuteness contest with another.

3. Resources wasted persecuting one form of wildlife is as the expense of the real issue.

4. The UK was once covered by forest. Humans deforested it. This has the biggest impact on all wildlife.

6. The best use of resources is to preserve and restore natural environments.

7. Then ALL wildlife benefits. Anything else is partial.

8. And we have to change the mindset that our species is in charge of, and owns, everything.

9. Humans are capable of great wisdom and compassion but are sometimes misguided.

I won't support them any more. I love squirrels, and I don't care what colour they are, same as people. Are those so-called environmentalists all racists?

Hadn't looked at it that way!

Squirrel-haters. I've cancelled my donations to the wildlife trust. Thanks for the heads up.