Protecting Green Spaces At Every Scale 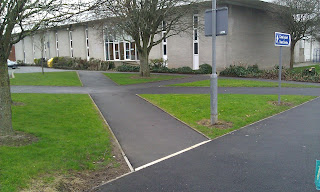 We've written about how, over time, more and more paths are laid, slicing up green areas. "Death by a thousand cuts". It happens at every scale. The photo above was taken recently at Ysgol Penweddig, Aberystwyth. At one point that was one large piece of grass. Then a path was laid across it "for convenience" because some people kept cutting across the grass in order to save a second or two. Then the footpath was widened. Then, as more people cut across the grass from the new path, further paths were laid (some fairly recently). A green area gets sliced up into smaller and smaller wedges. No-one takes an overview of it, no-one steps in to protect the green spaces - perhaps planting bushes, trees and flowerbeds across the areas people were cutting across, to protect them from being trampled. It's always just "one more path". And it is the same with roads and housing estates, up to the scale of things like the proposed M4 extension that would destroy huge areas of important wildlife green spaces, without even fixing the underlying problem - too many people, too many cars, and an assumption that the earth is ours to do with as we wish. In another thirty years there will be so much traffic the bypasses will need bypasses, the roads will need widening, and the same process that has been going on at an accelerating rate for hundreds of years will continue.

Most people – and most politicians too – don’t see or care about the big picture.

Another example is the way people replace back gardens with paving. "For convenience." But it has a big impact on wildlife. Likewise, we've seen many front gardens concreted over for parking spaces. Please don't pave your gardens! Instead take up the slabs and plant bushes, trees and flowers.

Every road that's built isn't a one-off. It's an ongoing drain on resources. In Aberystwyth at the moment a mile of road has been dug up, to be resurfaced with hundreds of tons of chippings and toxic chemical tars. It didn't have any pot-holes, and some suggest it is just the Council using up money at the end of a budget year so that they can claim the same amount next year. Money that would have been better spent on creating wildlife-supporting green areas, or clearing up litter. 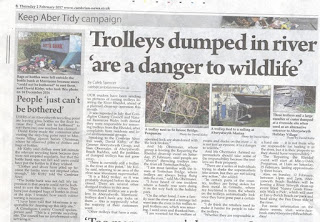 Until we stop covering green areas with roads and paths and paving slabs and new housing estates there isn’t going to be much hope of a future. But if we all look at the big picture, and make changes at every level, and talk about the things that are being lost, maybe we can halt this process, so that future generations of humans and other species don't inherit a degraded planet.

You do see that all over. Well, I made a big change last year when the car broke down - didn't replace it! Got a bicycle for short journeys, use teh bus and trains for others. It's been surprisingly stress free. I can read on journeys now, wicked.

What have the Council done to that green area/paths? They are idiots. They should have planted stuff on it, then it would add to biodiversity AND stop people walking over it.