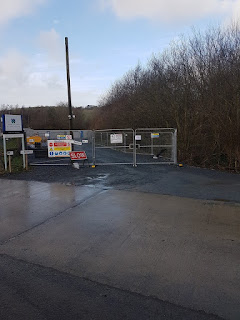 Used to be a wildflower meadow

It was a meadow before, it's a meadow no more ... and we'd only just posted about loss of green spaces bit-by-bit.

Some Aberystwyth residents were surprised recently when one of the local meadows was dug up and laid with road surface instead. This was a wildflower meadow, part of a vital wildlife corridor, and also a route used by runners, walkers and dog walkers around the Dwr Cymru Welsh Water sewage works, that took you through fields and woods. Now it is all blocked off and built over.

A map of the meadow area as it used to be - part of
a loop around the sewage works.
It also impacts the pond area.

Another view of the green area built on - you can see
the way it has closed off a quarter of the loop, and
the footpath is clearly visible from space!

The nearby area "houses otter habitats on the river and high invertebrate interest, particularly beetles and spiders. Wet woodland, grassland and shingle banks see willow, alder, gorse, oak, hawthorn and other species flourish." It was a botanical haven - we once saw orchids there too, though we're not sure what species they were. There's a pond immediately adjacent, which is now next to a tarmacked area rather than meadow, which vastly decreases the life chances of amphibians. The area was also known to be a location for water voles, which are facing increasing threats from developments like this.

It may be that Ceredigion County Council gave permission for this (possibly tied to a planning application from some years ago). If environmental surveys were done then they were obviously biased towards development - with any building on greenfield sites there is always a net loss of biodiversity. Was there a consultation, consideration of protected species e.g. water voles and mitigation schemes? Even if the Council gave permission this is still just legalised vandalism, when wildlife areas are destroyed unnecessarily.

There needs to be a system where there are proper consultations, where locals have a say in decisions that affect green areas (and not just a yellow sheet stuck on a post a few years previously). There needs to be more serious consideration of any proposed development that affects a green area. And the Council need to pay attention to objections, not just brush them under the carpet as a tick-box in a process - in our experience they have granted permission to many developments that destroy green areas despite huge local opposition - which is why so many people give up and stop objecting. What's the point if the Council doesn't listen? 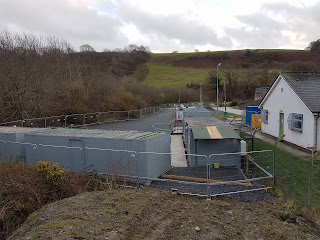 What it looks like now, from the other side 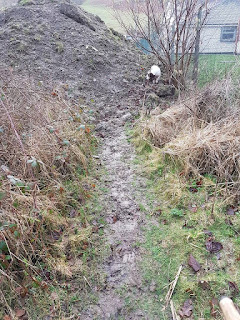 Blocked footpaths as a result


Update: to be investigated by the Council. See image below.

Also covered in the Cambrian News: 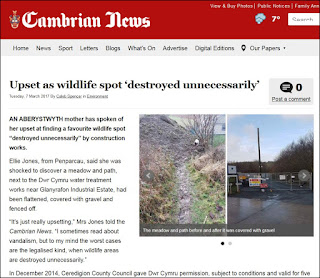 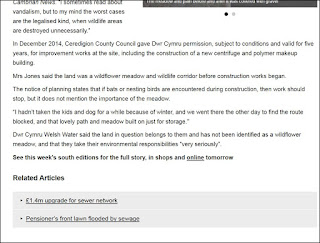 It’s really upsetting. I hadn’t taken the kids and dog for a while because WINTER, and we went there the other day to find the route blocked, and that lovely path and meadow built on just for storage. They’ve not needed that space for 25 years, can’t see why it became so important now (especially as they have an easy private route to Glanyrafon and could store things there). It’s now a dead end if you try to walk round, but that was only a bit of it – it’s the wildlife and the green spaces I care about. I know this is only one small area, and the Council’s already given permission for many other sites – and allowed loads more to be built on since I came to Aberystwyth – but it is still always upsetting. The fact that the Council might have given permission means nothing. Nature didn’t give permission. The wildlife didn’t give permission. The locals didn’t give permission. And the Council doesn’t speak for any of those three. Maybe if people kicked up a fuss more it might make those in power think a bit more rather than signing off every horrible development.

Thsi is disgraceful. That was such a nice route. And it looked so pretty in the spring and summer. I think Dwr Cymru claim to "care abotu the environment" - total bollocks, obviously.

I wish they could be forced to restore it to how it was. It would never be the same but it would teach Dwr Cymru a lesson.

Puts me totally off Dwr SCymru.