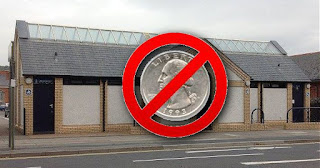 Ceredigion Council have shut down a number of public toilets in Aberystwyth and Ceredigion over the years. Now it has been discovered that the Council will charge money for another one in Aberystwyth (see here), and a lot of residents are rightly angry about it.

It's been asked before, and the Council hasn't answered, but this is the key question: what is someone meant to do if they need the toilet and don't have any money with them?

People don't pay council tax in exchange for one or two distant "award-winning toilets". People just want reasonable public toilets that they don't have to pay for twice. Public toilets are a core service that councils are meant to provide, not some cash cow to be milked in a pay-to-pee fiasco.

It's worth noting that the toilets on the Aberystwyth train station platform are closed much of the time, directing people to the public ones instead. What a rubbish "transport hub" that turned out to be, after Ceredigion Council wasted money on it.

We really need a law forcing rubbish Councils to provide enough public toilets. Something like this. Unfortunately that public health Wales bill was not passed, it fell at the last reading, though it is expected to be reintroduced as a bill in November - so still could become law. Contact your AM about it if you live in Wales and care about public toilet provision.

Strangely, it is the free public toilets opposite the new Tesco / Marks & Spencer that have suddenly become ones you have to pay for, just as the supermarkets open their doors. People busting for the loo are now more likely to go into the store opposite. Coincidence? These are the same supermarkets that led to houses being demolished, and a woman evicted from the home (she owned!) by Ceredigion County Council so the supermarkets could build here. This is no surprise from a Council that seems hell-bent on filling the town with supermarkets. After all, supermarkets bring so many benefits:

Typical Ceredigion. Bunch of wankers running it. The whole Mill Street thing has been dodgy from the start.

The Council leaders are a bunch of money-grabbing idiots.

The Council people who made that decision, and the ones who allowed the monstrosity to be built on Mill Street Car Park, couldn't wipe their own arses.

And whereas it was a car park lit by sunlight before, it's now got artificial lighting on 24/7, wasting electric.

I wish we could sack all the council.