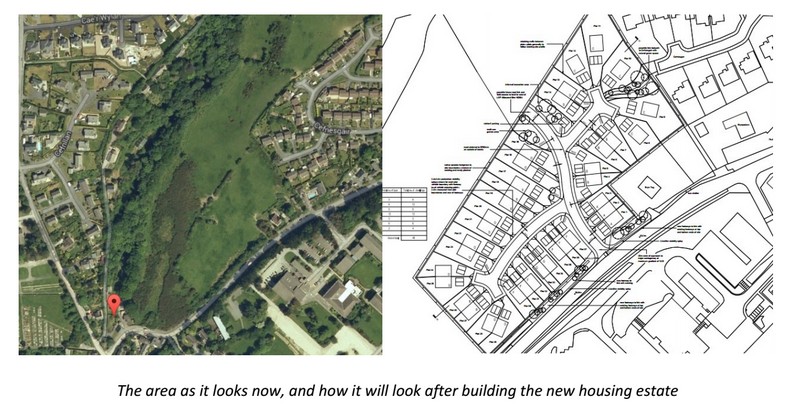 We've mentioned in the past that Ceredigion County Council have been working with developers to build a number of new housing estates on greenfield sites. This one in Llanbadarn Fawr would include 48 houses and totally wipe out another meadow, one of the only large greenspaces still remaining in Llanbadarn Fawr.

We've been told that there will be a Site Inspection Panel of the Development Control Committee at the site at 11.30am, 18th December 2015 (i.e. when most people will be in work so won't be able to observe). These are the details shared last time:

Summary: Ceredigion County Council have been working with developers to build a new housing estate in some natural meadows in Llanbadarn Fawr. Many people believe that it would be inappropriate to build houses there. If you agree then you can contact the Council to comment on or object to this proposal. There are some things you might like to consider below.

Traffic: This development would inevitably increase traffic through the village - estates on steep hills lead to increased car use (people are less willing to walk and cycle, especially on a steep main road). This is a road that is already extremely busy during peak times: increasingly so as the University has moved more departments and students to the Llanbadarn Campus. This increased traffic would be an inconvenience, safety hazard, increase pollution and fossil-fuel use, and have a negative impact on the neighbourhood.

Flooding and water run-off: We have seen the disastrous effects of flooding in recent years. Flooding is worsened by building on greenfield sites that act as water sponges. The houses and road below the site would be adversely affected.

Visual: the proposal to build on that site is completely out of character with the local area.

Housing: Ceredigion County Council has allowed thousands of houses to be built in Aberystwyth over the last decade, and plans to build thousands more over the next decade. This is a ridiculous amount of growth, and threatens to destroy the things that make the area worth living in. Ceredigion’s population increases are coming from in-migration (as mentioned in the UDP, p.7 Section 5.6), therefore, all these housing estates are being built to meet external, not local, needs. This has a negative effect on the Welsh language and the whole community. In one Cambrian News report it was stated that the increase of 600 people in the previous few years in Ceredigion was from in-migration. There are also lots of properties on the market in this area which are not selling.

Wildlife: The meadows on which the houses would be built are a rich wildlife habitat including bats, badgers, foxes and owls. The area is also a vital wildlife corridor in an important conservation area, and needs preserving for biodiversity reasons.

Greenfield site: We should be preserving what greenfield sites and meadows are left, not destroying them, especially considering all the other developments that have been allowed in recent years. The natural environment has intrinsic value. Also, this is a conservation area.

Development goes against Ceredigion policies: this development contravenes many of the County Council’s key policies, e.g. as the Council developed for the Unitary Development Plan which was the basis for current planning.
The start of further loss: The plan clearly shows an access road to then add houses to other fields nearby; if this development goes ahead it is clear that there will be proposals for further developments on the remaining fields.

An alternative suggestion: The Council should buy the land, make it a community area, plant more trees, protect the local wildlife and green natural haven in keeping with area. 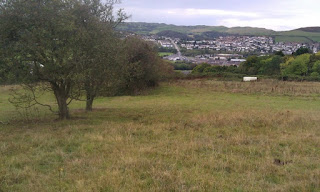 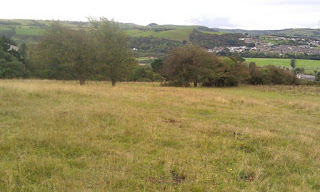 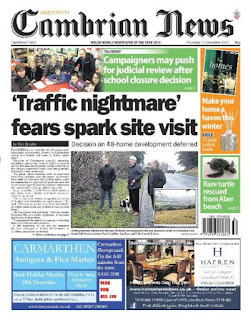 Cover for the Cambrian News, Thu 17th December 2015 issue (not yet out) - but
the headline only focuses on the traffic issue, not the loss of green spaces

Updates
We've been in touch with a few people who attended the Council's site visit and been told the following (paraphrased in a few cases).

"The planning people from the council seemed total bored listening to us [the objectors - Ed]. I didn't see any of them making notes on what we said. Theyd made their minds up already - even admitted they'd recommended passing the application."

"The planning bloke's only argument FOR the housing estate was that they'd 'allocated the area for residential development' in their county plan. But the PEOPLE of the county hadn't allocated it as residential! Just because the council carves the county up in cahoots with developers (the developer's agent stood with the planning committee) doesn't mean it's been any way agreed. Hell, Ceredigion's first planning document, the UDP, was thrown out by the Welsh Government because it was a pile of s**t. So Ceredigion renamed it as the LDP and still continue to base decisions on the outdated and undemocratic rubbish."

"The County Council's housing and traffic projections are so out of date it is laughable. The planning committee didn't take account of the fact that there are now over 2,500 staff and students on the campus just over the road, which is way more than there were a few years ago. And since the university's new halls of residence were built, there are more than 150 properties for sale in the Aberystwyth area, and there are even grants being claimed to convert HMOs into owner-occupier properties again, which will create even more. There is no demand for another 50 houses built in Llanbadarn Fawr."

"The traffic data [the planning department] were depending on had been given them by the developers! No wonder they kept it quiet until specifically asked. The dodgy dossier claimed that there wouldn't be a traffic problem. Yeh, right. The devloper plotted out over 150 car parkign spaces on the new estate, which would mean much more than 150 cars going back and forth since there would be deliveries, post, visitors, friends and so on. The develpers report was biased, and it bore no resemblance to what we see in the village. The local community councillors Gareth Davies and Paul James did a good job of debunking the spurious 'evidence'." 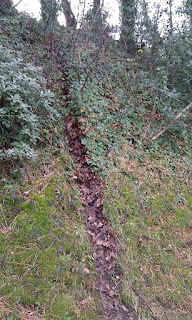 "The planning department at Ceredigion say there is no evidence of wildlife on the site,
no wildlife implications based on their data, no badgers or anything like that.
They must have been looking with their eyes closed then."
[Photo taken the day before the site visit.]

Ooh, that's horrible. Are they going to let them build everywhere? Whens it going to stop? I wish i could hold back the council tax, the council just seem useless.

Any one of those reasons you list could be good enough to stop this application (and there are others you could have included). Unfortunately I'm sorry to say that this planning application will go through anyway. CCC are not interested in objections and just don't turn down applications for housing estates. Just look at the applications they let through every week in the county.

I can't say more but this is not unusual when lots of money is involved, people know each other (the Council liaises with devs all the time over potential sites to build on, they're not strangers), vested interests etc ... but let's just say the objections will be ignored (or, rather, will be used to slightly reduce the housing density as a token gesture - but the Council will still allow building on that site). Much as I'd love to be wrong I've worked here for too long, heard too many conversations, and know the attitudes of those involved. I don't need to give away insider stuff to prove it, just look at the County's planning history, it is all there. I recommend anyone to FOI them and find out how many housing developments they've passed in the county over the last 20 years, and how many they rejected on environmental/green/eco grounds. It only goes one way. You’ll see I’m right. At least you don't have to work with these people. (I presume).

I was at the site visit. I have been on this Earth for many years & Seen many changes. It strikes me how little democracy there is here. We generally have no say in decisions that affect us. This seemed to be no different. No matter how many objections there are to something, the council will go ahead and do what it wants anyway. That's the feeling everyone has. You object and they ignore you. The council has turned the planning process into a way to wear you down and put you off objecting. They should be ashamed of themselves. I fought for the country, and they just ignore me. All I can conclude is that someone there is in the pockets of the people who want to build all those houses. I played in that meadow as a child. It is part of my village history. They want to destroy it. They have no respect. It is good that you try and make this all visible, but I am losing my respect for the council. I really am.

I wish I'd objected, but I think the council wouldve just ignored it anyway. They ignored all my others. Buncha wankers. My family lived her for years, and its just another housing estate after another. Cefn Llan, all along Morrissons to town, its like they cram them in everywhere.