It's important to have clear and unambiguous signage on roads, cycle routes, and pavements, so that it is obvious who can go where. Let's go for a ride. 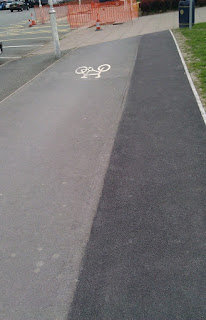 Mmm. This is strange. Three lanes. One has a cycle symbol.
Are the other two for pedestrians?
And why do they just end at nothing? 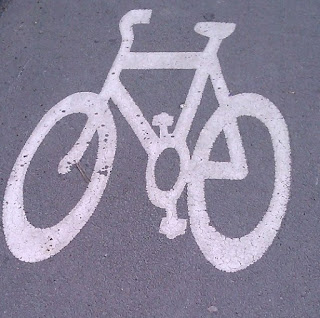 A bicycle. I can cycle here. 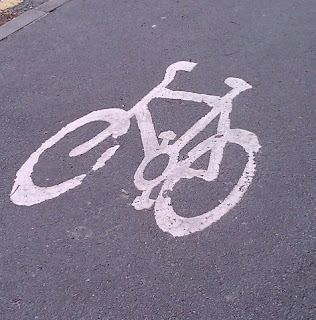 This one's a bit tatty. Pedestrians on the path too. Is it a cycle path, with the pedestrian path over the road, as the signage implies? Or is it a joint-use path, but where Ceredigion County Council were so inept that they didn't put up joint-use signage, and still hadn't corrected it over ten years later? You decide. 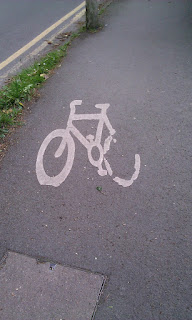 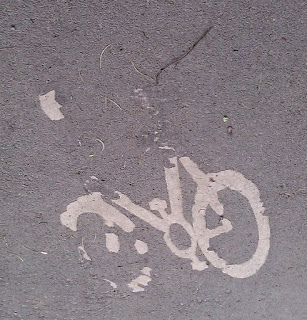 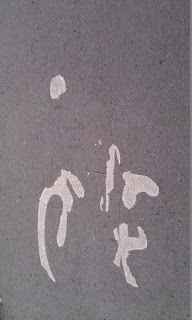 A bas-relief face or a worn bicycle? 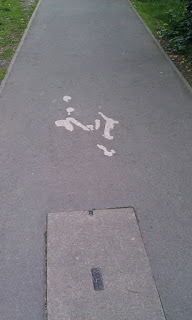 Is that a bicycle I see before me? 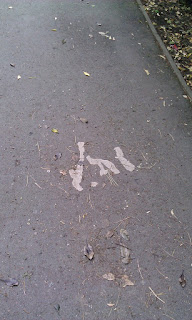 [Sound of wind blowing tumbleweeds in the Twilight Zone of Ceredigion]

It doesn't look like clear signage is a priority in Ceredigion. And in case you think we're picking on Ceredigion County Council and should just report the signage to them - we're aware of people who have done that already, many times over the years. The Council either ignored the letters, or replied saying they would do something the next year... but they never did. Ironically, in some cases they have chosen to waste money on unnecessary widening and still not bothered painting over the neglected and worn-out signage nearby. Then again, a pot of paint and fifteen minutes? Nah, we're expecting too much of the Council.

Lastly, if you try and find the Council's information about cycling in the county, you mostly get sent to their old, dead website, presumably because their new website only has a small portion of the information residents need and want.

Haha, yeh, crazy council. There were like three paths already, along the same route! One on each side of the road and one on the other side of the bushes in the cemetery. Actually, make that four, cos of the one throu the middle of the cemetery. They shoulda just left the one thyre digging up as bike-only (which is what the signs always showed). Walkers coulda used one of the other three routes. That woulda been sensible. But no, they'd ratehr waste us money.

Someone told me that it was dual-route but the council were such idiots they put up signs just showing bicycles. I can believe it.

Thanks, good points, we'll make a note of them!