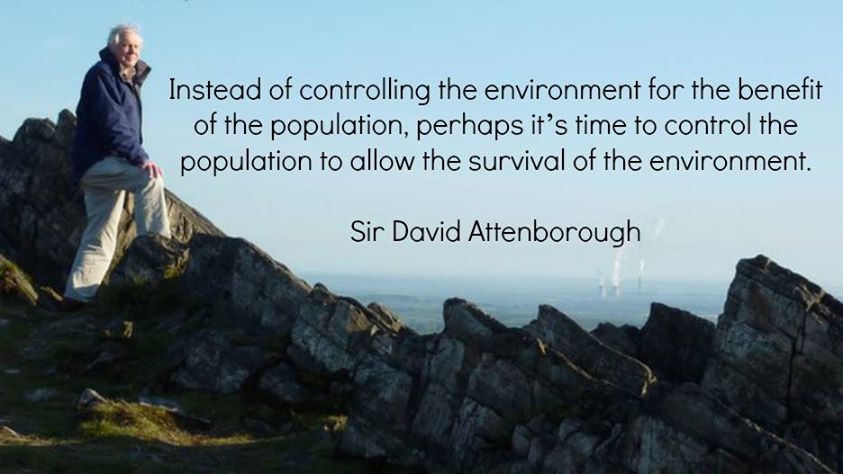 The growth of the human population is one the biggest threats to the planet. Every other problem (pollution, consumption, waste, food resources, road building, loss of greenfield sites etc.) is magnified by it.

Yet it is a topic politicians are terrified of addressing.

Here are some interesting links.
Western civilisation doesn't even take any route to ameliorate this, unlike a village in India which plants 111 trees every time a girl is born. Generally, Western societies encourage population growth by offering financial support to people who have children, with the amount of money given increasing with each child. Maternity leave is another example of creating structures that encourage having children. If we don't rethink our attitudes then the world left to children looks increasingly bleak.

Some organisations which focus on population:


The world is overpopulated, eh?
When are you leaving?

Impossible to know, isn't it? Probably for the best, knowing your future could be worrying.

By the way, concerns about population don't mean you want to go round getting rid of people. The answer is just about making fewer new ones.

That Anonymous is a nob. It's like they're encouraging suicide. Shows what level they are thinking at.

You make good points. It is something I think about smetimes. It struck me once when I'd been trekking for a day, stopped to take in the view - and you could still see roads, paths, buildings. The impact of our civilisation everywhere, and getting worse.

Y'know what? I think I'll adopt. Seems like the altruistic response. So many kids need homes, it's irresponsible to bring more into the world. Anyway, thanks for making me think.

Population is certainly the elephant in the room. Limiting population - as China has done with its one child policy - is seen as very unpalatable in the West. And also discussing the fact that Western lifestyles take up more resources than the rest of the world tends to end up in circular arguments of being accused of wanting to limit other people's lifestyles just because we the West have wrecked things, and thus why can't China etc want to have X cars per family, meat every meal etc etc.