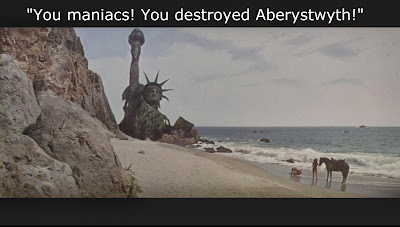 CIN had posted about the opportunity to object to the ruinous Mill Street developments. Here's a guest post we were asked to put up.


It was with disappointment, but not surprise, that I heard that the Tesco planning permission had been approved.

According to the BBC news story, "After the decision, council leader Ellen ap Gwynn said: 'Now that the statutory process has been completed, work on the Mill Street development can begin in earnest.'" I remember going to the packed Morlan Centre debate about this proposal and I can recall hearing various Plaid Cymru councillors speak against this proposal. What’s changed? They’re now in power.

But I don’t want to turn this into a political point, because I think whoever was in power would have voted this through – it’s their ‘big idea’ so they’re bound to support it. The plans were approved by Ceredigion's development control (aka planning) committee on 13th November 2013 by 19 votes to one. The only person sensible and brave enough to object was Mark Strong, saying he didn’t want to face independent shopkeepers struggling and telling him he’d “made a mistake” in three years’ time (reference). Well done Mark! (The list of who is on the committee can be found here, and if you don’t know who all those surnames are, their full  names and council elected areas are here - everyone except for Mark voted for the development).

But what’s the relevance of the Tesco/Marks & Spencer development, with 500+ parking spaces to the CIN blog? Well, if the shops are to be successful there’ll be increased traffic and thus air pollution and environmental damage from increased petrol use; potential loss of biodiversity through loss of trees, a waste of resources through knocking down 12 houses plus 3 large buildings, then building a massive 3-storey building; and flooding risk.

There’s also the social and community aspect – loss of people’s homes including through the divisive CPOs (compulsory purchase orders), and potential negative effect on the many independent shops in Aberystwyth who sell things that Tesco and Marks & Spencer will sell.

Apparently there were 71 objections to the project. I wondered how much attention was given to the objections. Was there proper consideration of their points or does the Council just ignore them and do what it wants? For each of those 71 objectors, who took time and effort to make their points known, I bet there were probably at least another 10, or 50, who objected but didn’t feel able to go through the convoluted process.

The document says "All the issues raised by the objectors have been fully assessed and taken into account by the LPA in the determination of this planning application."

If you’re interested, the papers from the Development Control Committee can be found on the Council's website here.

Part C – Main reports – is the document with the Mill Street application in. There are 40+ pages of consideration of various matters. Some of the points I thought might interest your readers are:
The report goes on into detailed consideration of impact issues such as retail, housing, traffic, flooding, biodiversity, design, landscape, environmental health, heritage, employment etc. If you’re going to read it I suggest having some calming activity lined up for when you’ve finished.