Missed opportunities. That could be the slogan for those in charge of planning for Aberystwyth (and Ceredigion). The Aberystwyth Gateway Transport Infrastructure project has gobbled up £2.5 million of our money. The centre of the town now has less greenery than before, and what have we gained? Slightly different pavements and moved, draughty bus shelters that are confusingly labelled with both numbers and letters. People were appalled at the work that was done (we gave a sample of some comments last February). It's no surprise when those in charge of planning refuse to demand that green spaces or trees to be incorporated into proposals. The 'infrastructure project' also failed to incorporate cycling into the changes, another missed opportunity which shows that the money wasn't really being spent on an integrated transport network. A spokesperson for the worthy Sustrans said of the Aberystwyth project:


"The simple provision of a dedicated cycle lane would have made the whole area safer for everyone. The council has neglected to include this in the redevelopment and this just illustrates their lack of vision and their total disregard for the needs of cyclists. It was a wonderful opportunity to have a safe route for cyclists incorporated into the development, but the result is that cyclists have to negotiate a busy and dangerous area. Aberystwyth’s ‘transport gateway’ has become a disincentive to people to use sustainable forms of transport." [Cambrian News]

Let's campaign to try and improve at least a few areas, since the Council can't be relied on to do that. There is a proposal to green Aberystwyth's approach road - see this mention in the GAG news page, and watch the video below.


That would be a huge improvement on the current situation!


Talking of trees, the base of the trees in Aberystwyth town centre could have grass, bushes, flowers (the space around the larger trees is certainly big enough). Instead of that the County Council choose horrible blocks of rubber! Urgh, it looks so spartan and unnatural. Another missed opportunity. The County Council would rather spend money on covering soil with chemical compounds (and just put out flowers in pots when the tourists come so they can be hidden away again when they leave). What a waste of money, as well as an eyesore. 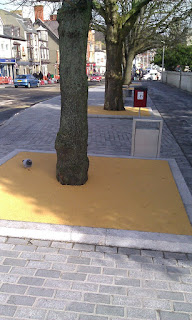 How to make everything as artificial as possible - Aberystwyth's
new £2.5 million waste of money! 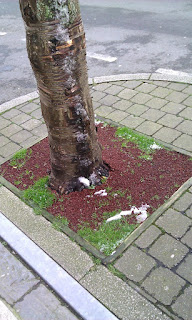 The rubber eventually degrades anyway and just pollutes
the soil. What a waste.

I don’t disagree with all of this but I’ve got to take issue with some of it.


“The centre of the town now has less greenery than before. Those in charge of planning refuse to demand that green spaces or trees be incorporated into proposals.”

It’s true that bushes and small trees have been removed. On the other hand, five new trees have been planted as part of the scheme, three of these in prominent places in the middle of the pavement where no trees existed before. As well as this, five substantial trees have been carefully built around and conserved and these trees now have a much wider protection space given to them than previously. There may just be a net loss of greenery in the scheme but it’s pretty marginal.

One of the key ideas of the scheme is that the bus stops should be altogether so that passengers won’t have to walk from one end of Alexandra Road to the other looking for the right bus stop. Seems sensible to me.


“confusingly labelled with both numbers and letters”

The numbers were put up after a complaint that the lettering uses the English rather than Welsh alphabet. The lettering will be taken down eventually but I imagine they’re waiting for things like the Traveline Cymru website and phone app(which still have the lettering in its directions) to catch up.


“failed to incorporate cycling into the changes”.

Agreed. The arguments were put but the funders didn’t accept them


“the County Council choose horrible blocks of rubber! Urgh, it looks so spartan and unnatural” (this part of the post since removed).

The idea of putting rubber around trees was introduced after the Greener Aberystwyth Group complained that many trees around town had a a metal surround that cut into the trees when they expanded. Although I'd prefer that weeds were allowed to grow around them, it’s amazing how many people complain that this looks untidy. To cater for both trees and people who like a tidy street, the council decided to put in water-permeable rubber surrounds. These are now quite common in towns around the country and are regarded as good practice by people who care about trees in towns. I don't like the colour either.

The flowers are planted for the growing season. That kind of happens to coincide with the tourist season. They’re taken up when they die back at the end of the year, like the ones in our gardens.


“Let's campaign to try and improve at least a few areas, since the Council can't be relied on to do that”

A substantial green project for Aberystwyth, which Council officers have been working on for some time in partnership with various others, is being announced today. We need people to carry on campaigning on other things though.


Some of the good points about the Gateway scheme as I see it:

* The scheme has been developed with the bus operators to make getting in and out of the bus station easier for them. That obviously helps the bus service to run better.

* Bus stops are now all in one place.

* A new pedestrian refuge has been built at the Park Avenue end and the three zebra crossings at the Thespian Street end improved.

* Pavements have been widened on both sides.

* Once the legalities have been agreed with Yr Hen Orsaf, the plan is to take out the slip road at the front of the station and make the whole space a pedestrian zone. Alexandra Road will then be narrowed and the crossing area widened to make the road easier to cross and to give more space to pedestrians and less to cars


I’m certainly not saying it’s perfect but, when finished, the Aberystwyth Gateway scheme will make life much easier for bus operators and users and will allocated substantially more space to pedestrians and less to cars. That may not be perfect but it's surely good.

Thanks Alun, your points are sensible and we've taken them on board. Thanks for the extra information. Best wishes, CIN.

"(this part of the post since removed)"
It's still there, but below the jump link.

"Although I'd prefer that weeds were allowed to grow around them, it’s amazing how many people complain that this looks untidy."
What we would want is plants, bushes, flowers at the base, not weeds - so it would be greener without being untidy.

"The flowers are planted for the growing season. That kind of happens to coincide with the tourist season. They’re taken up when they die back at the end of the year, like the ones in our gardens."
There are plants that flower all year - we don't take up any plants from our garden but have flowers throughout the year (though admittedly, far fewer in winter, but there are still some lovely pink ones that last until February).