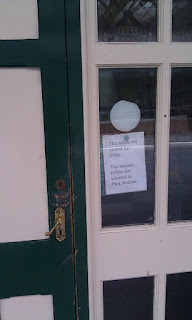 Being able to go to the toilet is a basic human need. Even when we travel.

The toilets on trains are not known for being pleasant places to visit (hello Arriva Trains Wales!), but they are vital. Unfortunately you sometimes find yourself at a train station waiting for a train, or having just left one, and in need of the toilet. You may then discover that a) there isn't one, or b) it has been closed (see above, a common occurrence), or c) you have to pay extra.

Why should you be bothered if you have to pay 30p or more to go to the toilet at some train stations? Well, the obvious issue is that you've probably already spent a fortune on your tickets (some commuters pay thousands for their season tickets). You would therefore expect to have free access to toilets at the train stations. "Hey, but what if people who didn't buy a train ticket just sneaked in to use a toilet?" I suspect that wouldn't be the end of the world, but in that case implement a system whereby if you have a valid train ticket the toilets are free, and anyone else can pay. That seems fair. However, it isn't clear who is responsible for stations and toilets in this world of privatised services and buck-passing.

The other problem with having to pay to use the toilet in train stations is that if you arrive in a strange city, possibly after dark, desperate for the toilet, then find that you have no change then you are left in a very difficult and unfair position. This is the kind of thing that puts people off public transport, when (environmentally) we should be making it the primary means of transport for the UK. A cheap, reliable public transport system is vital to the functioning of a modern society. Sadly, the UK does not have a cheap, reliable public transport system yet.

It's a shame that none of the political parties have on their manifesto to make sure the train station toilets are free for ticket-carriers - they would gain a lot of votes from people with their legs crossed.

Going back to the image above - there is something silly about shutting the toilets and telling travelers that there are public ones on 'insert road name here'. If your train is due then you can't risk leaving the station, and if you aren't from that town then you won't know where the hell 'Park Avenue' is or how far away it is. And if it is an evening train the public toilets will probably be shut too.

Readers may be interested in the FixMyTransport site for reporting problems with a journey or train station.

We will be forwarding this suggestion to Justine Greening MP, Secretary of State for Transport, and will post any positive response here.


Update 1: The perspective in Wales. We contacted the Welsh Government and the news was good. They said:


Thank you for your email of 14 May to the Welsh Government about charging for the use of public toilets at train stations. I have been asked to reply.

ATW will operate public toilet facilities at stations during the hours that station staff are present. I appreciate that this may mean that toilets are not open throughout the whole of the day/evening, however, it is not uncommon for anti-social behaviour to occur at unlocked and unmontiored station toilets.

We would not expect ATW to introduce charges without consultation with the Welsh Government, and I can confirm that there is no policy to introduce a charge at any station in Wales with toilet facilities.

Update 2: The UK Department for Transport response. The DoT replied on 7th June as follows, an informative and helpful response. We'll follow up on the links. Network Rail seem to be the ones who aren't passenger-focussed.


"I must say first that the franchise agreement is silent on charging passengers to use a station toilet. It is therefore a decision for the individual train operators whether or not to do so.

In reality, apart from at stations operated by Network Rail (i.e. Birmingham New Street, Cannon Street, Charing Cross, Edinburgh, Euston, Fenchurch Street, Glasgow Central, King’s Cross, Leeds, Liverpool Lime Street, Liverpool Street, London Bridge, Manchester Piccadilly, Paddington, St Pancras International, Victoria and Waterloo), there are very few stations managed by a train operator (and I cannot think of any, certainly not in Wales) where there is a charge to use the toilet.

You may therefore wish to contact Network Rail to ask about their policy of charging passengers to use their station toilets. If you do find any pay toilets at a station other than one operated by Network Rail, you should contact the relevant operator. You can find out who operates any railway station in Great Britain using this link on the National Rail website

May I also suggest that you also contact Passenger Focus, the statutory body that represents the interests of rail users in Great Britain, as no doubt they have their own views on the subject.

It is unfortunately true that you will occasionally find station toilets temporarily closed during their advertised opening hours, whether because of defects, vandalism or other reasons (including various forms of misuse). Under such circumstances, we would expect the station operator to address the issue as soon as possible.

I can assure you that a train operator cannot permanently close a station toilet without the Department’s consent under the Railways Act 2005 and we would not normally grant such consent unless we were sure that adequate alternative toilet facilities were available at the station."

Email ThisBlogThis!Share to TwitterShare to FacebookShare to Pinterest
Tags: transport