Promoting cycling to every door 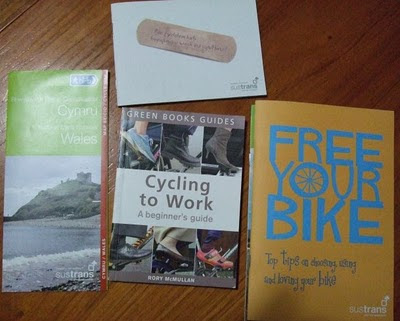 One of our supporters told us they had received a copy of the 'Cycling to Work' booklet pictured above some time ago, and it made cycling seem so attractive and easy that it inspired them to get back into it again. They felt that the booklet - or something similar - should be more widely available as a way of promoting cycling, giving practical advice on all aspects of choosing and maintaining a bike.

There is no doubt about the many benefits of cycling. They therefore requested that Ceredigion County Council's 'Highways, Property and Works' department (responsible for cycling schemes) should distribute something about the benefits of cycling to all homes in Ceredigion. It would get many more people interested in this healthy and fun means of transport, benefiting Ceredigion residents, the environment, and relieving traffic congestion and pollution, as well as being cheaper than unenvironmental road expansion schemes. The booklet was even printed locally (Cambrian Printers) so they could be used again for this project.

There would also be potential to work in partnership with large local employers such as Aberystwyth University, the National Library of Wales; and with other Council departments responsible for Tourism and Leisure, Environment and Planning, Health and Well Being (since cycling crosses over with all of them).

There is a very good 'Get Cycling Ceredigion' magazine - but is only seen by people who are already into cycling, and even then it is not widely available. Distributing that to every home could be an alternative. Whatever was used could have a huge impact on getting people off roads, thereby improving health and the environment, but the key is getting the material to people - hence the requirement for a copy for every household as a one-off project.

We will see whether Ceredigion County Council rise to the challenge.

Update 19th November 2010: No reply from the Council yet.

Update 16th January 2011: Between October 2010 and January 2011 we contacted the Council five times before we finally got a reply. Unfortunately it does not commit to any actions at all:

"Your comments / suggestions in relation to this publication are noted, however the department has no plans at the current time to supply each household in Ceredigion with a copy of this book due to the cost implications of such an exercise. However, the content of your letter will be revisited should funding for an initiative of this nature be forthcoming in future.

The publication “Cycling to Work” has been used / supplied by the department previously in a targeted manner, when it undertook refresher cycle training for staff who were considering cycling as a means to commute to work.

As stated in your letter the department produced the bilingual Get Cycling Ceredigion guide. This guide was distributed to every school pupil in Ceredigion, reaching a significant proportion of households within Ceredigion, and it is available at all of the Authority’s Tourist Information Centres. The magazine is also soon to be available online on the Ceredigion County Council website."