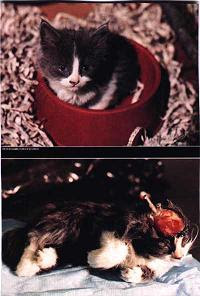 
We have been asked to promote this petition about the vivisection experiments being done at Cardiff University (covered in the news here), behind closed doors and funded by the public who are kept in the dark about the unscientific cruelty they are funding. Sign it here. Note that other Welsh universities are involved in this primitive practice too. Complain to your MP and AM!

Further information from the BUAV:

In the experiment, nineteen kittens, just two-six months old, were subjected to invasive surgery under anaesthesia in which their windpipes were sliced, catheters were inserted into blood vessels and parts of their brains exposed in order to implant electrodes. The fate of these kittens was not stated. In 2009, Cardiff University was responsible for using 46 cats, which accounted for 26% (over a quarter) of all those cats used in research facilities in the whole of the UK during that time period.

Much of the animal research carried out at universities is funded by taxpayers. The Medical Research Council supported the kitten experiment."