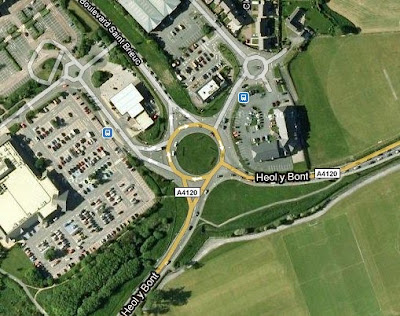 CIN was recently informed that a proposal to widen the roundabout between Llety Parc and Morrisons has been submitted to the Welsh Assembly Government (WAG).

Sadly, local Plaid Cymru councillors have been lobbying to get road entries widened (aimed at 'improving traffic flow entering the roundabout' = making it easier for car drivers), as they state in their 'Llanbadarn Fawr Newsletter' (February 2010). They said that as a result of their lobbying an engineering consultancy company, Atkins, were appointed by the Mid-Wales Transport Consortium to look into proposals for the WAG Regional Transport Plan 2009/10.

Threat to the proposed ban on intensive egg production 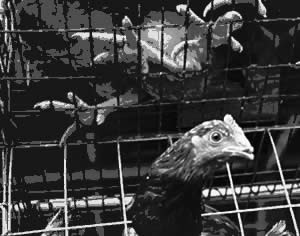 The Polish government has proposed to postpone the EU battery cage ban, which would be due to come into force in 2012. This proposal will be addressed when the EU Agriculture Council meets on 22 February. If you are annoyed at the cruelty involved in intensive farming techniques, and believe that they have no place in a civilised society, please urge Jim Fitzpatrick MP to oppose Poland's suggestion. There is a lot more information and a form you can fill in on the Compassion In World Farming page. Please take a stand against cruelty.
No comments:

There are many informative (and some upsetting) videos in the Animal Aid video vault. Have a look if you want to see what is wrong with horse racing, or current practice in UK abattoirs.

This week Ceredigion councillors accused the Welsh Assembly Government of breaking its own transport plan because staff from the new WAG building were regularly parking on double yellow lines. The story is covered in the Cambrian News (longer version in the print issue).

Do you need meat to be healthy? Can a vegan be an athlete?

In the Winter 08 issue of PETA Animal Times, p21, Neal Barnard, M.D., answered the question "Do athletes need to eat meat?" His answer was:

"Absolutely not. Some of nature's strongest "athletes" - stallions, bulls, gorillas, and elephants are vegans. Whether you're an on-field pro or a weekend athlete, going vegan will give your health and energy a boost.