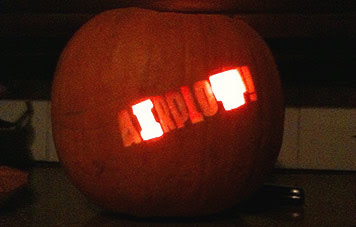 Greenpeace is running the Airplot campaign to prevent a massive extension of Heathrow and the proposed increase in air travel generally. Their site includes information about why unrestrained airport expansion will make it impossible for the UK to play its part in tackling climate change.

Basically the government plans to go ahead with airport expansion across the country even though this means we'll have no hope of meeting our climate emission targets. At full capacity, Heathrow would become the largest single source of greenhouse gas emissions in the whole country. We can't let this happen if we are serious about tackling climate change.

Greenpeace bought a plot at Heathrow to make sure that climate change cannot be ignored. They will challenge the proposals every step of the way - building a strong community to oppose the runway, creating a legal block against any planning applications or attempts to buy the land, and if necessary physically blocking construction - standing with the people of Sipson, whose 700 homes would be flattened to build the runway, to stop the bulldozers. Sign up here!

Update 28th January 2010: Greenpeace wanted the Airplot to be a block to the the expansion of Heathrow. That is working - everyone has created a legal block because over 65,000 people signed up to be beneficial owners of the plot. The Airplot has become a focus for cultural resistance, with artists, actors, and even the poet laureate down on the plot, helping to create allotments, orchards, raised beds and herb gardens on the land - resources for the community which will still be producing food and fruit when the plans for the third runway are long gone. Yet one year on the government is still determined to go ahead with the runway. Therefore Airplotters want to build something to help protect the site, and they have launched a competition - can you design something?