Visitors to Swansea can't fail to notice the City Centre bus station redevelopment taking place - it can be extremely confusing finding your way from the current bus dropping-off points to the city centre. However that wouldn't bother CIN - we support public transport!

What does bother CIN is when councils cut down mature trees. On Monday 20th July a CIN member was dismayed to see workmen cutting down mature trees as part of this redevelopment. The CIN member wasn't alone - a number of people stopped and watched, commenting that it was 'shameful' and 'absolutely irresponsible'. 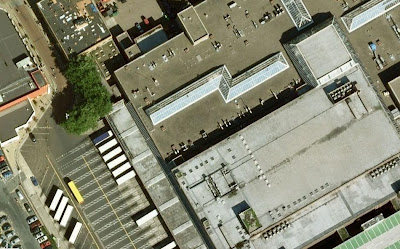 See the green, healthy, mature bus station trees in the image? These were some of the trees cut down by the Swansea Council workers on Monday 20th July. [Click image to enlarge]
It is distressing to see mature and healthy trees cut down and chopped up for no other reason than they didn't fit into some short-sighted idiot's 'vision'. The worst thing is that once the damage is done, there is no going back. It would take at least 40 years to get the trees back to that level of maturity.

Swansea City Centre has a reputation for being heavily-built up, the colour of concrete, with litter blowing around from all the junk food. What it needs more greenery, not less. As part of a redesign any decent planner would have incorporated and enhanced the existing trees, not killed them. The planner should be sacked.

It is as if Swansea Council don't care about their heritage. Another example would be the lovely old bridge that used to cross Oystermouth/Mumbles road (see image below). They took the bridge down, leaving the redundant steps up to nothing. It is now much more difficult and dangerous for pedestrians to cross the busy road. So the council removed a fantastic and historic bridge, penalised pedestrians, and left it looking stupid rather than just repairing the bridge. 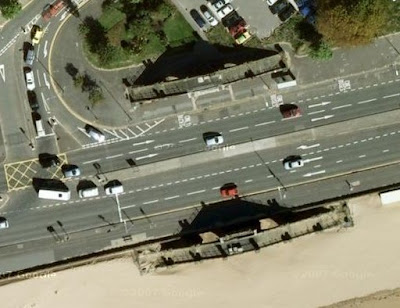 Stairway to nowhere - the remains of the great bridge.
We have contacted Swansea Council to see if they have any comment, but don't expect an answer. The damage is, after all, done.


"Your e-mail has been past to me today for my attention. Your concerns relating to the felling of the trees is duly noted, however, I would stress the decision to fell the trees was taken for operational reasons in order to deliver the redevelopment of the Quadrant bus station. It should be noted that the redevelopment is subject to a detailed soft landscaping scheme within which it is proposed to plant a total of 32 extra heavy and semi mature trees in addition to the high density shrub planting."

So it took twelve days to get that short reply from the Swansea Council, with meaningless phrases such as 'the decision was taken for operational reasons in order to deliver the redevelopment' which translates as 'we cut the trees down so we could build there' - which is not an explanation, it is just restating the thing that we complained about. CIN looks forward to the day that bureaucrats learn to speak plain English.

The AMs have not replied at all.